Sharing  a past favorite today. When we first adopted Mr. Tweet, the ladies (hens) had a hard time accepting him. He was so fluffy and they had not seen a Silkie before. Under normal circumstances, I don’t recommend giving chickens a regular bath. But there are certain times when it is absolutely necessary. Read on to lean why Mr. Tweet needed a bath to literally save his life and know that Yes You Can Give a Rooster a Bath! 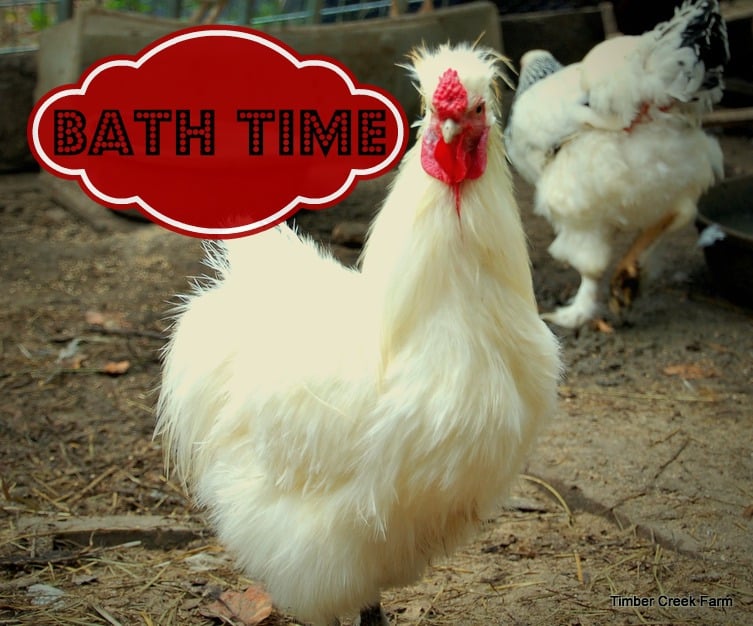 Okay  the title kind of gives the story away. But yes, Mr Tweet had to have a bath tonight. Here’s what happened. We were feeding and I noticed that there was a bedraggled looking chicken tail poking out from under the chicken house. We got the creature out and poor  Mr..Tweet was barely recognizable. He looked so sad and messy. Apparently he had fallen into the old duck swimming pool.( I am guessing this, he didn’t actually tell me) He was muddy and wet through and through. He looked so forlorn. I almost cried for him. But, I knew he had to get clean, because that mud is like glue on the feathers. They can’t fly or even clean it out themselves.This is the same mud he was depositing on Little Feather Foot, all over her back. Mr. Tweet has a very active love life, but lets keep this post rating PG.
So we got a bucket of water and proceeded to dunk him and wash off the feathers and swish him around again. Luckily he did not put up much of a fight. I began trying to dry him off. He started to get chilled so I wrapped him up in a dry towel and rubbed him gently. My husband decided to drive my car to the house, (with my phone in it)  to put the groceries in the refrigerator. I decided to take Tweet and sit down in a chair by the sheep pen. I went to sit down and the leg of the chair sunk into the ground tipping the chair backwards. I was pinned between the chair and the garden fence on my back holding a rooster, with my arm all scraped up from hitting the fence on the way down. So I am lying in a tomato patch,upside down, holding a rooster. Luckily I managed to get up before Hubby returned. I am sore. But I held on to Tweet!
After quite a while of drying feathers, he seemed good enough to go to bed. We put the crate in the chicken house and let him stay in there tonight. the other girls were now picking on him because he was so pitiful. A bit of his own medicine! But I couldn’t let them harass him all night. He needs to get better. He was eating so I think he will be fine. I’m not so sure about me. And the sheep are still laughing about seeing me lying in the garden holding a rooster wrapped up in a towel. I will never be the same.
“Ask the animals, and they will teach you, or the birds of the air, and they will tell you; or speak to the earth, and it will teach you, or let the fish of the sea inform you. Which of these does not know that the hand of the Lord has done this? In his hand is the life of every creature and the breath of all mankind.” (Job 12:7-10)