One question I hear a lot as cold winter sets in is, How do I prepare the winter chicken coop? As a longtime chicken owner, I understand the desire to give the feathered family all the best in accommodations. I mean, these birds give us healthy nutritious eggs and lots of enjoyment! I want to give my chickens the best of everything too. But, we also have to consider that the chicken is technically a farm animal, commonly placed under the heading of livestock and designed to withstand a certain amount of winter weather. I live in the mid-Atlantic area though where winters are not that extreme so lets break this down a little so you can make an informed decision on whether or not you need to add heat to your coop. Keep reading for more about the winter chicken coop.

Do We Heat Our Winter Chicken Coop?

Let me start with the temperate climate that I live in. We rarely have extended periods of time with temperatures in the single digits. Contrast this with my friends in northern Michigan, Canada, Maine, Upstate New York where weather may stay in the single digits during the day and dip below zero at night. In my area a fully enclosed well ventilated coop will not need extra heat during the majority of winters. Even during cold weather, when I open the coop in the morning, the water is not frozen solid and the coop is warm. The chickens have huddled close together on the roost and shared body heat. Last year, we had the exception to the rule and I did end up running a heat lamp in the coop for a couple of nights. The weather had been extreme for our area for an extended period of time. These type of extremes can stress the chickens and possibly lead to illness. So, I broke down and heated the coop with a heat lamp. This was plenty of heat for our coop and kept the birds comfortable and healthy. I was nervous about the fire risk and checked the bulb and cord frequently for signs of wear or hazard. I have seen extra safety measures taken using a metal chicken wire basket placed under the heat lamp to catch it if the lamp accidentally drops from where it is hanging. I take fire risks very seriously because every year you hear of tragedies resulting from heat lamps malfunctioning or being used incorrectly. Please take all possible precautions if using a heat lamp to warm the winter chicken coop. Read more on how to avoid a chicken coop fire.

If you live in an area with extreme weather, I recommend that you go cautiously into adding heat to the coop. Consider both the fire hazard, discussed above and the effects of added light during winter. Chickens feathers are made for insulating and trapping warmth. If a chicken has successfully passed through the molting season and regrown feathers, they will be able to keep warm if the coop is enclosed, has good ventilation and is not drafty. Of course there comes the point when a prolonged cold snap begins to take its toll and your birds may become stressed. I mention a different type of heat system for coops at the end of this post. 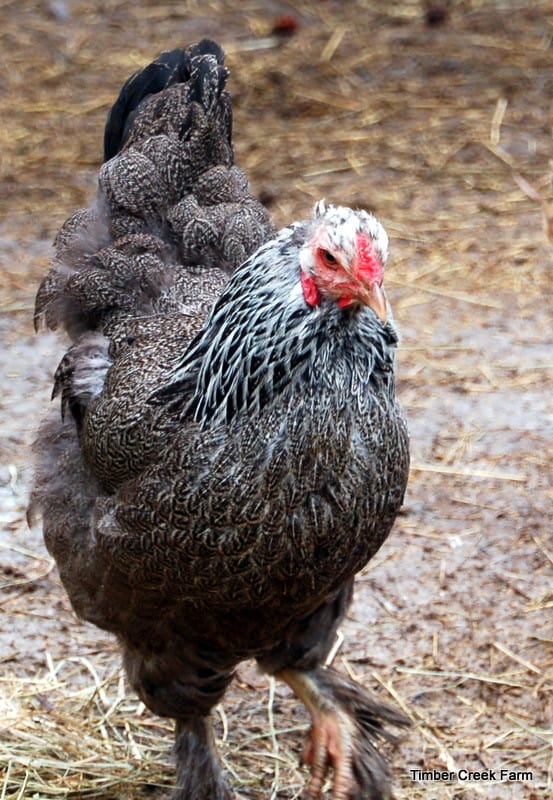 In addition to heat, the heat bulb  also provides extra light during the night. All that extra light can cause a chicken to produce eggs when it should be resting and recovering from molt. Letting the natural molting/no egg laying season run it’s course is what is best. This lack of egg production during molting season is nature’s way of giving the chicken time to build up again after feather production. It’s natural and should be expected. Some years our chickens molt quickly and will be laying eggs again during the winter months. Other years it seems that they take the winter off!

And lastly, if you do intend to heat your chicken coop, make sure you have a back up plan in place if your heat system breaks, or a power outage occurs. Chickens kept in a heated coop may not survive a power outage that takes out the heat source during a cold night. The sudden change in temperature can be deadly. I have talked to chicken owners who do heat the coop, but only to raise the temperature a few degrees. This way, if a power outage occurs the change is not drastic.

I am seriously considering buying the Sweeter Heater for our coop. It hangs on the coop wall and provides moderate heat using safer, low wattage power. The manufacturer recommends the Sweater Heater be side mounted for grown hens in a coop. I would only need to use it during extreme cold snaps here. You may need to use it more frequently where you live if your temperature frequently drops below zero.

Ventilation and Drafts- What is the Difference? 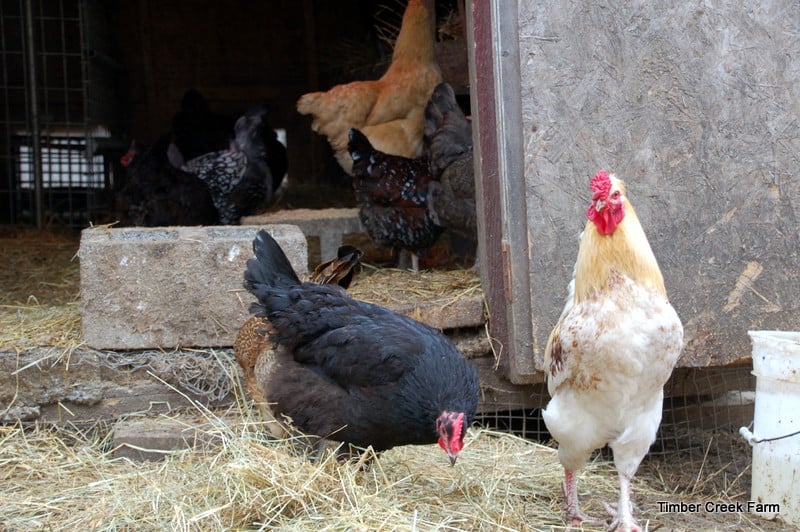 Ventilation is important even during cold months. Ventilation is air that freely moves in and out of the coop, gently. Drafts on the other hand, are air currents that blow directly on the chickens on the roost or when they are standing in the coop. Do not seal your coop up tight. The lack of ventilation will cause moisture to accumulate, causing condensation and this can lead to frostbite (Frostbite at first, looks like black spots on combs and wattles). Drafts on the other hand, will cause chickens to be stressed and cold. The difference between a draft and ventilation is the rate of air flow. If you see the chicken’s feathers lifting while they are on the roost, they are in a draft. Find where it is coming from and seal it off. Good ventilation will also keep the ammonia odor from collecting in the coop. Ammonia build up can cause respiratory problems in chickens. Ammonia builds up and gets worse in the presence of moisture and lack of ventilation. Air quality in the winter chicken coop is very important to your flock’s health, as they often will spend more time in the coop in colder months.

Keeping the Water From Freezing!

Water must be provided even during freezing weather. Luckily, once chickens go to roost, they don’t get up for a drink during the night. Make sure you provide plenty of water and keep the water bowl filled with fresh water during the day. During extreme cold weather here, I need to bring jugs of warm water from the house to refill the water bowls. I don’t use a water fount during the winter because the water freezes in the fount and it stays in there! I prefer to use the Fortex rubber feeding pans. They don’t break when frozen and the ice will break out easier.

If you have an electric outlet or electricity in your coop, there are heated chicken waterers available. If the power fails, the water in the fount will freeze solid and you will have a hard time getting the ice block out of the fount. The rubber feed pans have the advantage of being flexible so that the ice block can pop right out and you can refill the bowl. A lot of commercial products are available. The trick is knowing whether they will work for your situation or not.

How have you handled the winter chicken coop issues with your chickens? Do you heat your coop?

Until Next Time, Stay Warm!