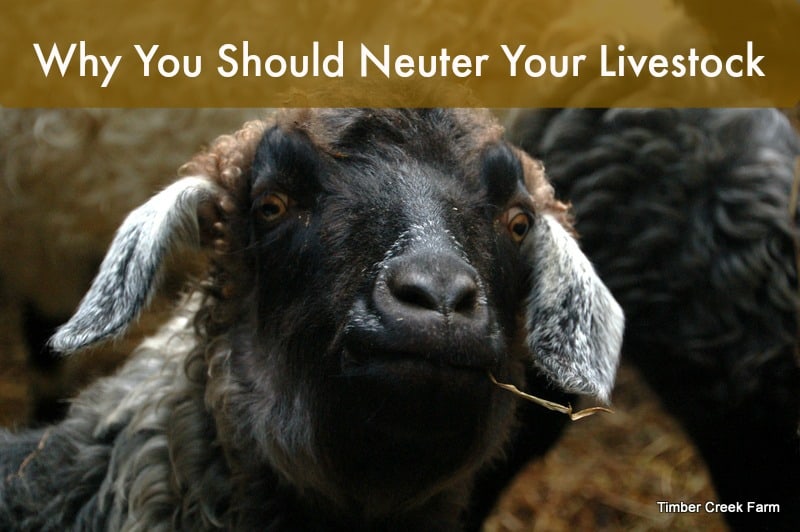 The decision to neuter livestock is part of maintaining a safe environment on the homestead or small backyard farm. This choice is of primary importance. Most of us are not running a breeding operation. We are raising animals for weed control, meat for our table, eggs, and other things like fiber and fleeces. Often, people don’t have the space to keep a bull, boar, ram or buck separate from the rest of the animals. In addition to space and separate housing, there are some serious facts to consider. Controlling the population on our backyard farms and homesteads is of primary importance. All animals require care, feed, veterinary services and room to move around. Over population can occur before you know it. 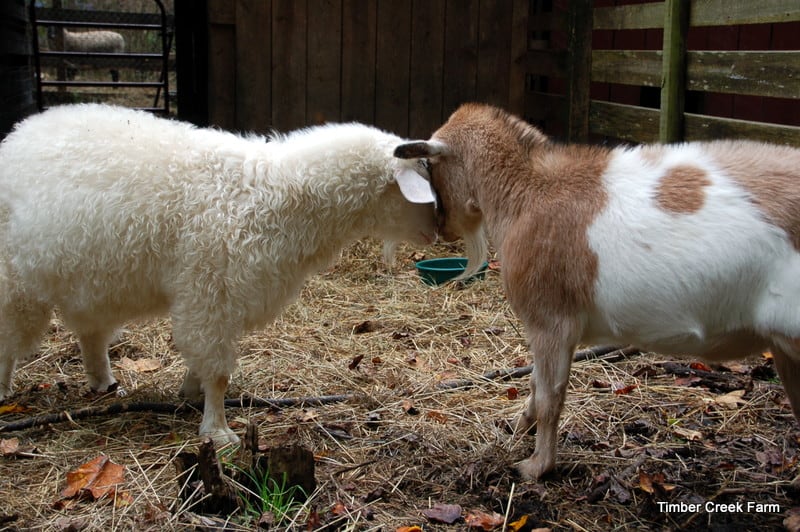 Boys will be Boys. Sparring is a natural activity for all goats and sheep and not necessarily just for Bucks and Rams

Not Breeding? Then, Neuter Livestock.

If you are not planning to breed your livestock, the most responsible course of action is to castrate, or neuter you livestock. Animal behavior is one reason to go this route. Males tend to be more aggressive, which can be a problem if you are not prepared to deal with this trait. Food aggression can be annoying and dangerous. An eighty pound buck jumping on you to get the food bucket can result in you being injured. The food bucket can be enough to cause a curious friendly, intact, male animal, to charge you and ram into you.

I have learned that letting a ram lamb become too pushy can lead to having a 100 pound lap puppy who thinks he makes the rules. Our ram, Ranger, wouldn’t let me into the pen, once he was full grown. I have been knocked down and also had my ribs broken by overly friendly male goats and rams. 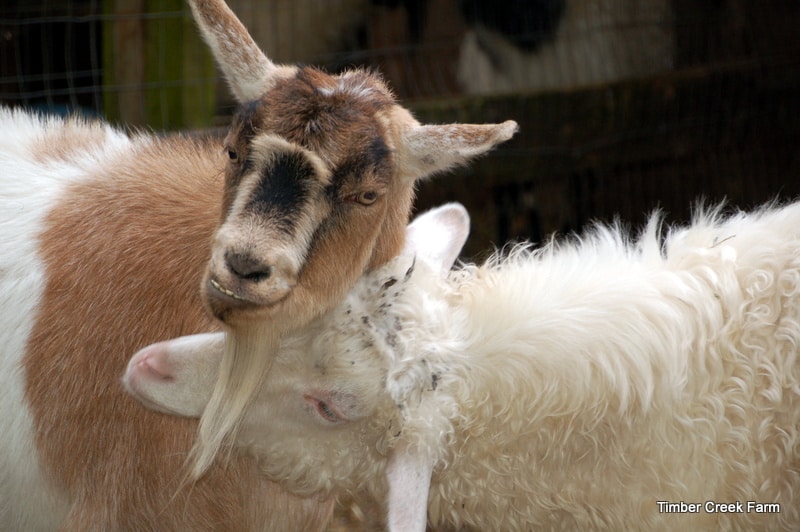 Neuter or Separate the Goats

Unwanted babies is another reason to neuter livestock on your homestead. Males left in the same field with the females often become territorial. Do not think that you can wait until you see mating behavior before separating the animals. As we were told as teens, it only takes once! By the time you actually witness mating behavior, you are probably expecting baby animals.

Micah and Pongo, two of our whethered goats

When Should You Neuter ?

Timing is another factor to consider when making the decision to neuter livestock. Waiting longer gives the urethra time to mature and reach its full growth. This will go a long way towards avoiding a later urinary track blockage, which male small ruminants can be prone to.

Of course, waiting can also have consequences. I waited too long to neuter a goat kid one year. Then bad weather arrived and by the time I was able to move him to another pen, he had impregnated his mother, sister and all the other females. Oops! We had a bumper crop of baby goats the following spring. If I had at least separated the males when they were weaned, I could have avoided this result. 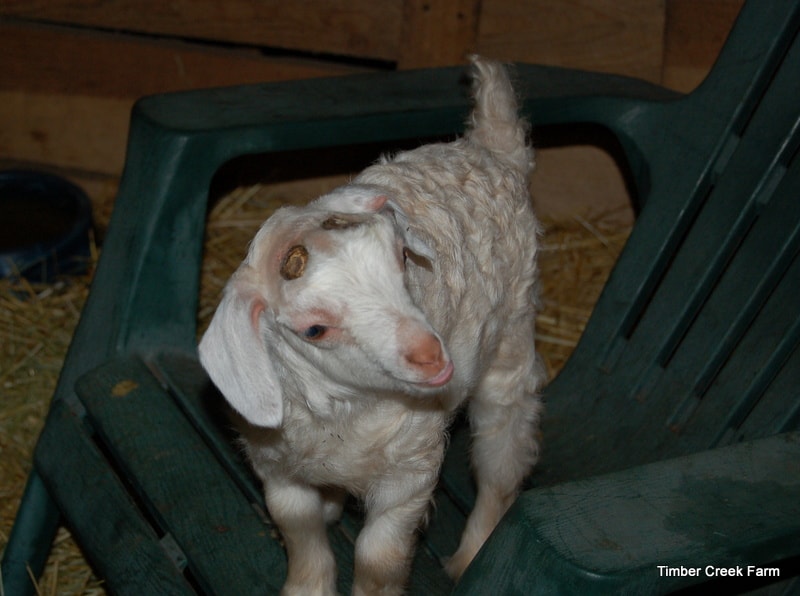 East end of a westward pig. Charlie as a young boar

There are multiple methods to use to neuter  livestock. Surgical castration, Burdizzo method and Banding with an elastrator are all methods used by farmers. I have been taught to perform banding and use the burdizzo but for our farm, I have chosen to go with surgical castration.

My reasons are that we usually only have a few babies here at any one time. I feel more comfortable doing something if I do it often. Surgical castration is one hundred percent effective and we have a good farm vet that I trust to do the surgery. If we were in a more rural location and raised more babies each year, I would choose to go with banding. Banding cannot be used on male piglets as they do not have hanging down parts.

Banding can leave a descended testicle though, if you are not careful, which can result in an unwanted pregnancy at some point. Our Ram/whether, Ranger, was banded as a lamb by the previous owner. He did not realize that one testicle had slipped back up into the abdominal cavity during the procedure. It later descended into the scrotum and resulted in him being fertile. The common saying when doing a banding is “always count to two!” before considering the job complete.

Ranger our Ram, that was supposed to have been neutered as a lamb

Another consideration is that the burdizzo and the elastrator for banding are both bloodless methods. Using a bloodless method results in less likelihood of attracting flies.

Roosters are not routinely castrated as it needs to be a surgical procedure and is not always successful. A neutered rooster is called a Capon. Neutering a rooster needs to be done before sexual maturity. In some countries this is accomplished by feeding or implanting estrogen but this is not widely practiced in the United States.

A bull will test your patience and the patience of nearby neighbors. A bull will spend a lot of time trying to find the weak spot in your fence line. Not to mention the large size and strength of a bull. Castrating a male calf would be the right choice if you are not running a breeding program. 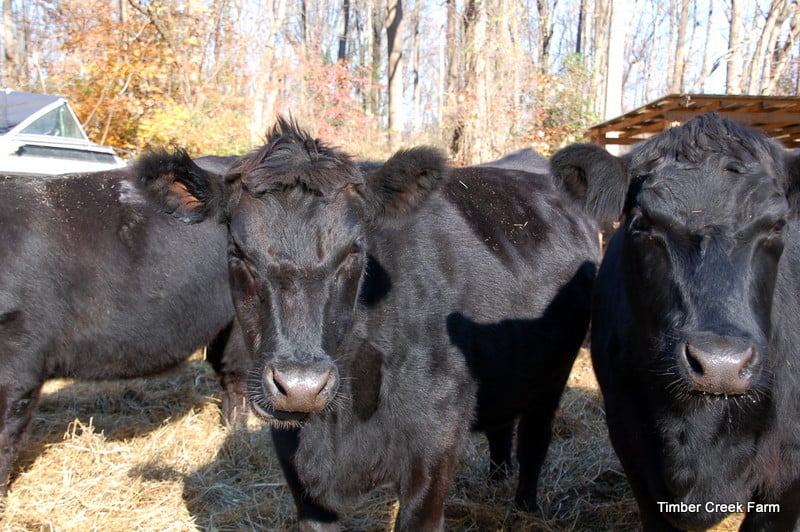 We chose to raise heifers for our feeder calves. The aggression is minimal as they mature but they are more content to stay on the farm.

Pigs – To Neuter or Leave Intact?

With swine, leaving the males intact in those pigs you plan to raise for meat, can result in an off tasting pork product, but only if they are left intact past the point of sexual maturity. This is a theory that is debatable, also. Some believe that if the males are separated from the female pigs, there is no tainted taste to the meat. Read more here. In our case, our weanlings are sold intact, to people who are planning an upcoming pig roast, to be held before the point of sexual maturity occurs. We are keeping one boar for breeding at this time. We are not having any issues with him as far as behavior, but he has two females to take care of and plenty to eat.

Hand raised pigs may be less dangerous, but it is always good to remember that the animal works on instinct.

As with any thing farm related, being informed goes a long way towards being successful. Make the decision before hand on how you will deal with male farm animals and make sure the task is taken care of in a timely manner. 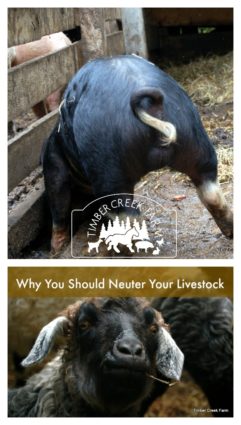