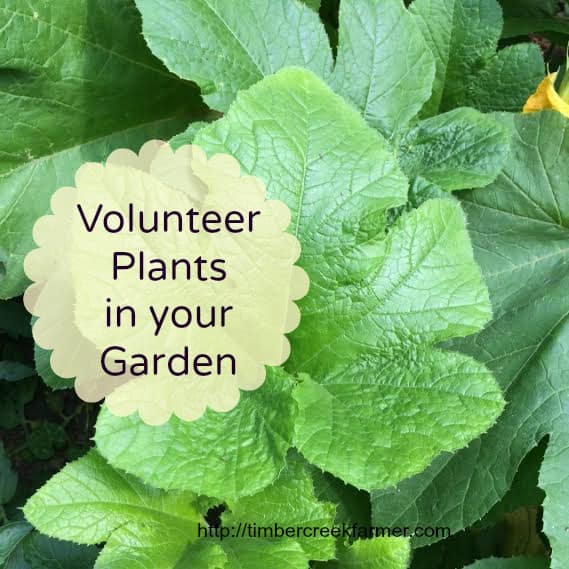 Volunteer vegetable plants invaded our garden! Our garden started off strong this spring, despite a cooler than normal spring. Cucumbers, onions, green beans, beets, kale and cabbage were planted into the rich, dark, fertilized soil. Everything was looking healthy and I was anticipating a good crop that would be canned and stored for the winter.

I was excited to see a few volunteer plants emerge in late May. I was hoping for a zucchini, as I had not planted any so far this year. One of the volunteer plants soon revealed itself to be a pumpkin vine and another had some sort of green squash. These volunteer vegetable plants  kept to themselves in the part of the garden we had not tilled up yet, so everyone was content with this arrangement. 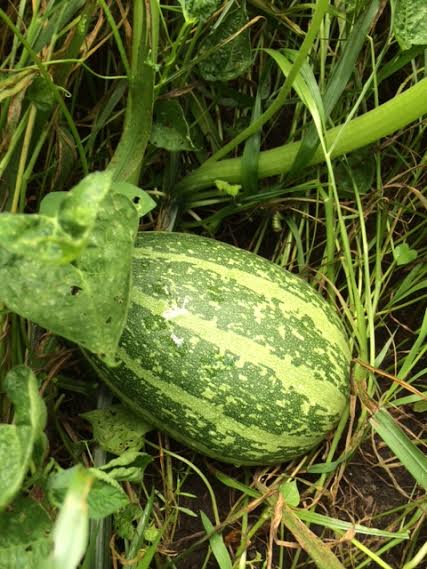 Soon, however, there were more squashy type plants emerging and then more. It was beginning to get crowded in the garden, but as I weeded I rearranged trailing vines and made room for everyone.

We were experiencing the best year, in many years, for cucumber production. Jars of pickles had been made and the cucumbers kept coming. And then, they stopped growing. Looking into this, I found that the pumpkin, squashy volunteer vegetable plants  were choking out all the other growth in the garden. They had their finger like vines wrapping around tomatoes, cabbage  heads, and the poor cucumbers. It seemed to happen in only a few days! The garden went from a bit overcrowded to choked in no time. Not only did I  have a pumpkin vine problem, but, other invasive edibles were making a valiant effort to be noticed, also. The smart weed, which flourishes  all over our property, had made it’s way  into the garden and was impersonating tomato plants. 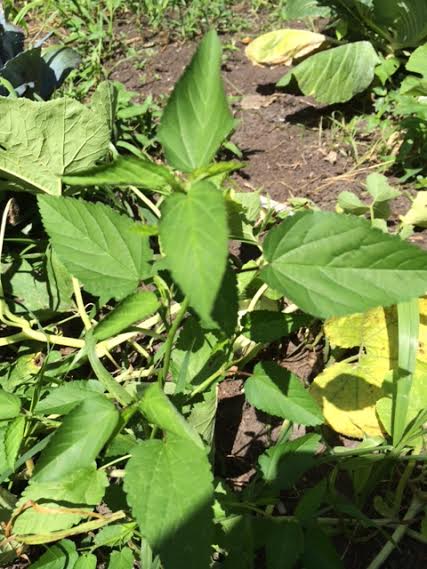 A sticky, vine like weed was wrapping itself throughout, along with an invasive morning glory type vine and causing quite a bit of damage too. The garden, which was producing beautifully a few days earlier, was now struggling. It’s hard for me to choose  which plants would stay and which ones would have to go. We love pumpkins and I was happy to see so many on the vines, but we needed variety too. 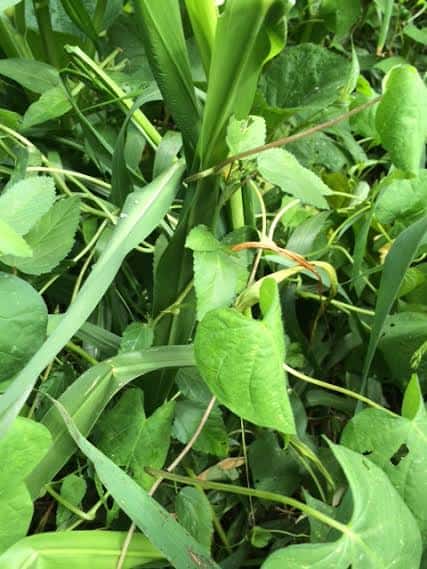 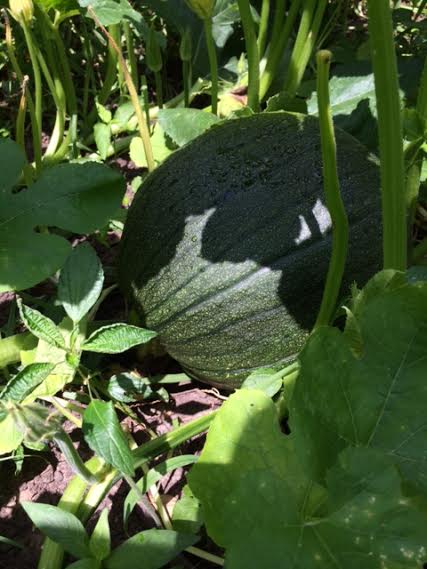 Luckily, I found a few of the plants were prolific at flowering, but were not setting fruit. So these were taken out. 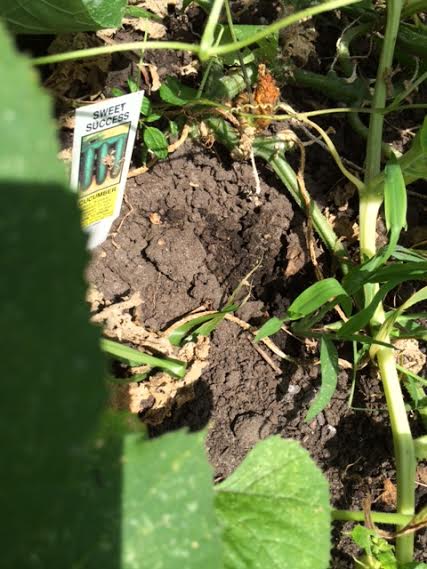 The only thing left of the cucumber vines in some cases, was the tiny garden marker

There were some unexpected benefits from the large leaf cover. I noticed that no matter what we did, rabbits were eating the tops of the green bean plants. The bean plants that were doing well, were the ones hidden under the broad leaf protection of the squash plants. I left these bean plants where they were. Hey, it was working! The kale was also benefiting from hiding under a shady leaf. Kale, which is usually a cooler weather crop, was still producing new leaves of dark green. 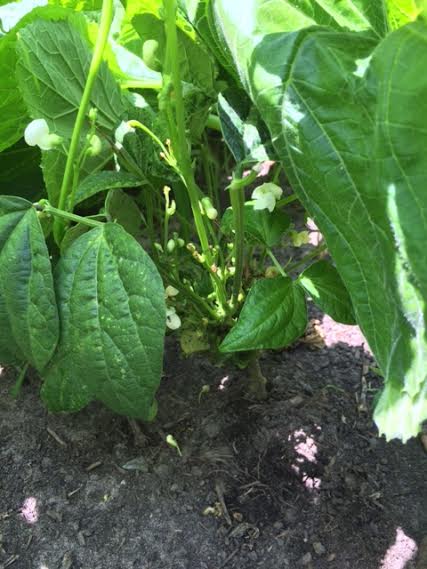 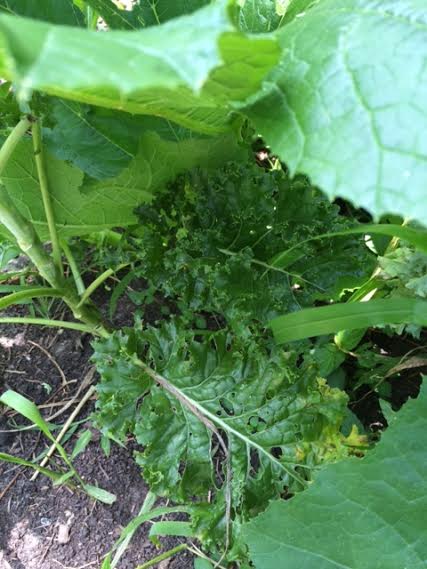 The kale and green bean plants hiding under the squash leaves were doing pretty well in their sheltered hideout.

How I handled the Volunteer Vegetable Plants

The viny morning glory needed to be pulled. I pulled what I could find. It wraps itself around the tomato vines and stems. When you pull the morning glory vine, you often damage the tomato plant if you aren’t careful. I carefully traced the vines back to the ground level and carefully  clip it off there.

What do we have?

So far, the only weed, edible forage that is  behaving itself in the garden is Purslane. It seems to be coming up in the bare spaces left by plants that were choked out by the pumpkins. Purslane, sometimes referred to as Pig Weed, is actually an edible, nutritional herb. Purslane is packed with vitamins, beneficial Omega 3 fatty acids and antioxidants. In many countries you will find Purslane sold in grocery stores and food markets. Any way, it is nice that it isn’t taking control of things as the morning glory vine is attempting to do.

Plantain also grows abundantly on our property and it probably grows wild in your yard, too. Both broad leaf and narrow leaf varieties are edible and medicinal in nature. Plantain is also a nutrition packed green, which can be eaten plain or in a salad, cooked in a stir fry or boiled. 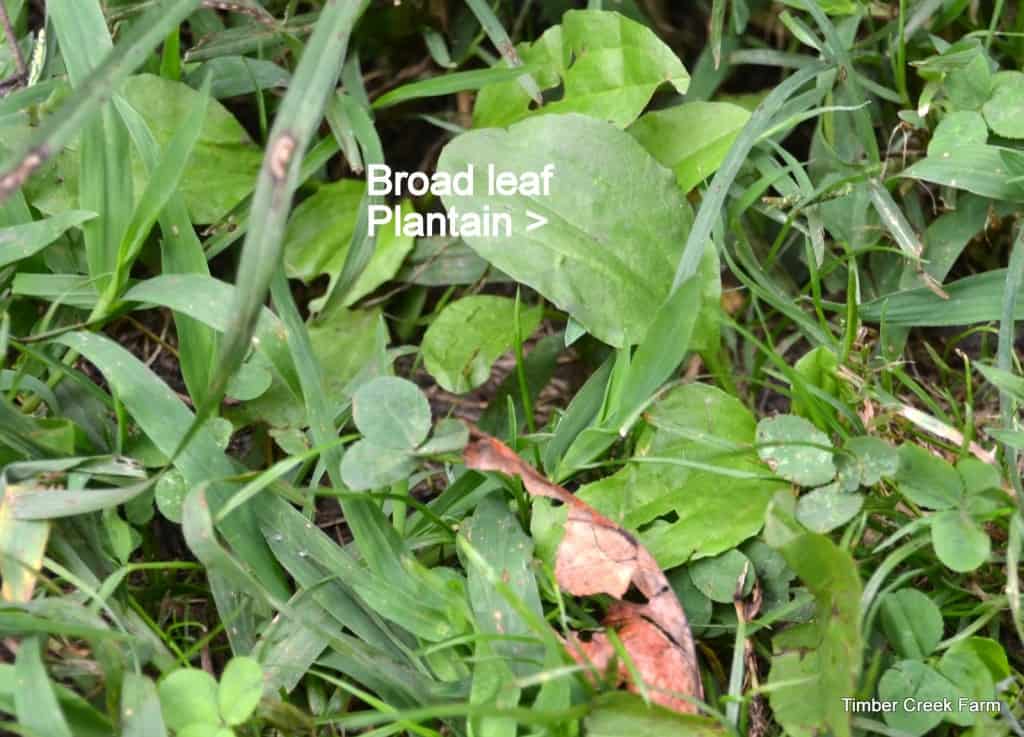 Plantain has antiseptic, and antibacterial properties. When I see a patch of healthy Plantain growing, I pick the leaves and bring it home to store. The botanical is easy to store in a number of ways. Dehydrate the leaves and store the dried flakes is one method. Then use the dried material in homemade salves or just rehydrate into a paste, and apply to bee stings, insect bites, bruises, and other skin injuries.

Plantain makes a useful extract, too. Place clean and dry leaves in a mason jar. Add vodka to cover and store in a dark cupboard for four weeks. Shake gently occasionally. Strain the mixture, discarding the leaves. Store the extract in the refrigerator and use in homemade lotions, salves, and other skin remedies. Use Plantain in a creme to add to your farm first aid kit.

How Did So Many Volunteer Vegetable Plants Start?

Why do we have so many volunteer squash and pumpkins? Last year, a very nice grocery store in our area,  agreed that we could have the pumpkins  that were  heading to the compost heap, and use them to feed our animals. So the pigs  ate a lot of pumpkins while they foraged in the garden space. And while they roamed and foraged, the pigs nicely planted some pumpkin and squash seeds. Just another benefit of free ranging pigs! 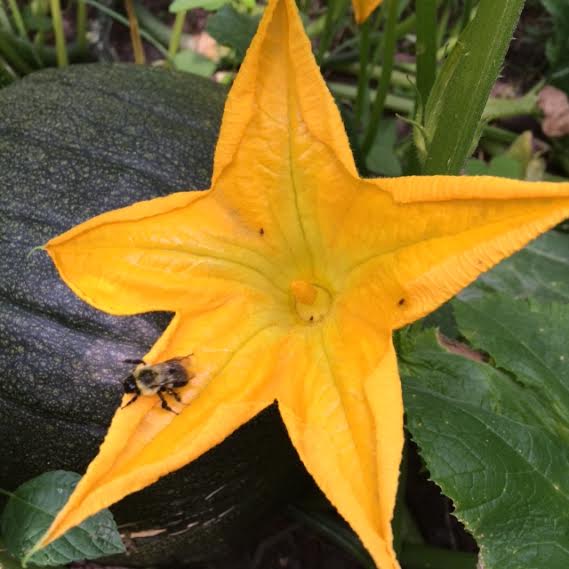 Our fall garden is now sprouting. This planting area did not host pigs working in it, but it does get it share of problems from the rabbits, deer and other forest creatures. Which just further adheres to my theory, that in homesteading, gardening, and farming,  It’s Always Something! We may not have harvested all the vegetables we had hoped for in the main summer garden, but we did have plenty of good food to harvest. Pumpkins are so versatile and can be used as a side dish, in casseroles, breakfast smoothies, and baked goods, to name a few uses. We will not be hungry.