?(during the holiday season, I was asked to update the story of Gus and Greta.? It seems my good friend Judy, was so enchanted? by the story that she used it for a sermon at her church.? I do not attend her church so I did not have the pleasure of hearing the sermon but I did think it was pretty cool that my little blog was the inspiration.? So here you go Judy and all other followers of Gus and Greta.? The rest of the story.)
? Here’s the beginning of the story, if you missed it.

Happily Ever After… Not so fast.? Just when you think you’ve set up a wonderful idyllic habitat for your animals to live in and Bam!? Something goes wrong.? In this case, after only two weeks of cohabiting, my husband found two ducks in not so great shape.? One had a wound on her wing but otherwise no major damage.? The other ducky was found soaking wet, covered in mud and unable to move.? Our first thought, after drying them off and taking inventory of symptoms and wounds, was that they got in a fight with each other.? At the time neither one had? been laying eggs yet, so we thought they were boy ducks.? We dried off the wet duck, set up a crate with a? heat lamp and lots of dry straw and made (him) comfortable.? (S)he drank some water and we thought He (she) had just lost the fight.? As the day? went on (she) recovered? a bit and we closed them up at night with high hopes for a full recovery.??

Early the next morning, I let everyone, including the injured duck, out in the yard while I cleaned up and filled feed bowls.? I turned around and noticed that the turkey hen was quietly attacking the injured duck.? What a bully!? I grabbed up the victim and proceeded to separate the turkeys and the ducks.? While cleaning up the crate, I found an egg!? Apparently, I did not guess the sex of the Pekins correctly.? Out of the three Pekins we were raising, all three are hens.?? At least with the Rouens the males and females look different.??

Anyway, back to the story of the living arrangements and what to do now.? I mentioned this to a few poultry raising friends and found out that turkey hens can be quite aggressive.? Space is not as much of a problem as time for us.? We had just added on the duck pen and duck house, and then added another pen to give them more room.? It looked fantastic.? How would we find time to build a suitable turkey area right away.

?I was disappointed that our beautiful plan had to be altered. The whole incident stepped on my vision of the animals peacefully living together in harmony.? And the strange thing is, I think the turkeys missed interacting with the ducks.? Animals react on instinct and whatever it was that made Greta attack the ducks we will never know.? The thing is though, these animals are mine to care for and protect.? We had to come up with a plan.? After a few days of trying different arrangements, we even considered re evaluating the decision not to cook the turkeys.? But then inspiration struck.

The duck house had two pens and two doors.? What if we put a fence down the middle of the house.? The turkeys can use one door and one pen.? The ducks can use the other door and other pen.? Eureka!? We even made the inside fence removable for easy cleaning.?? 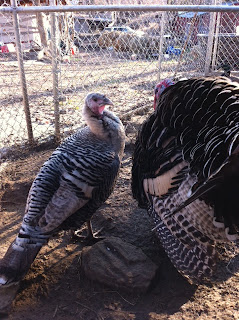 So far, it is working out beautifully.? The turkeys can still see the ducks who they are attached to in some weird way.? Peace reigns again.? Who knows for how long.? One thing I have learned from raising children and animals is this.? Just when you think you have it all under control…..

Our initial disappointment at the squabbling led to an even better arrangement.? Life is crazy, uncertain and ever changing.? Enjoy the peaceful moments and be flexible because challenges will come.?? and in the words of the famous Paul Harvey – that my friends is the rest of the story.