We often get questions about our dog, Chief. He is a beautiful dog, large boned, broad head, strong and dark yellow. He is a registered Labrador and is doing well at the age of  10. At the farm, Chief is indispensable help in keeping the unwanted, harmful critters away from the flocks and herds. In fact, most of our farm animal losses  have been when we have been gone for a few days and Chief has not been on patrol. We spend a lot of time on  the farm with Chief and he has become a wonderful farm dog. But it wasn’t a smooth beginning to life with Chief.

First a disclaimer. I am not a dog trainer,  I am a dog lover. We have had many dogs and most were a bit difficult to train. I have now learned that I was probably the one that was not trained. Once we took Chief into our home, we had to get some help. He was already a large dog, and now he was becoming a problem dominant aggressive dog. We searched for help that did not include having him put to sleep. We had a feeling that with the right technique we could be successful. Here are some of the tips and training ideas we had to learn. 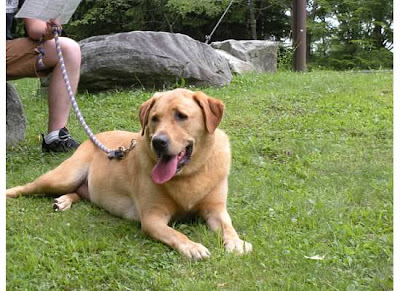 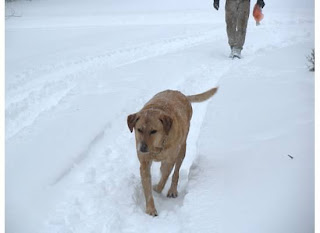 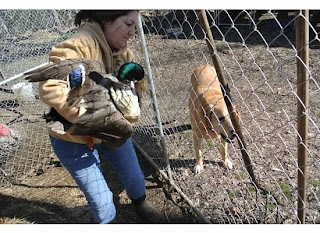 I think the single most important thing that we learned from the training course we took was that this is a dog. Do not put the dog on the same level as a human. Our dog almost was put to sleep because he was dominant aggressive to everyone including my husband. Cute little yellow lab puppy turns into Cujo when he didn’t want to do what we asked him to do. I strongly suggest you never let this happen. 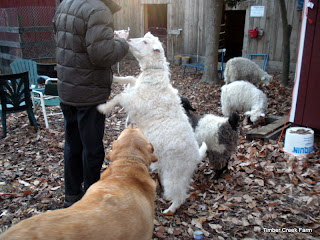 Even with a happy go lucky golden retriever personality, firmness is key. Firmly make them obey commands the first time. I don’t mean to imply cruelty at all. But with large dogs especially, it just isn’t cute anymore when they start to do whatever they want and you have to tip toe around them.

Some of the steps we learned to take included, making the dog get up if we were going to enter the room that he was lying in. He had to learn who was in charge. 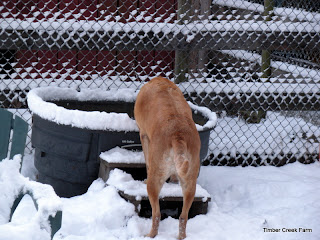 Also, he was not allowed on furniture. Allowing the dog to be at the same level as the human gives him the idea that he can be in charge. Chief was such a strong alpha male that he was always trying to be in charge.

Believe me, it was a pain, to always have to wait for the dog to get up  and leave the room so I could walk in. And we had to convince the whole family that this was necessary. But in the end it paid off.

Feeding time was a problem too. We had to make sure no one walked by him. He needed to learn that he could trust us to not take the food away. He had to sit and wait but then he was left alone to enjoy his food. No tricks and no training with the method of taking the food away or any of that.

At the farm, Chief was allowed to run and exercise but if other dogs dropped by he would still exhibit dominant aggressive behavior. He still does not have play time with other dogs. He only has one other dog that he can play with and she puts him right in his place! I don’t know if it is just his breed or what but I thought he would hunt the ducks and chicks for dinner but he never hurt one. Ever. He does help me round the chickens up when they escape their run and go into the woods. He’s very
smart and I tell him to bring the chickens back and he goes and runs them out of the woods. He is a little goofy with the ducks and barks at the chicks and ducklings. I guess he is telling them how to behave. 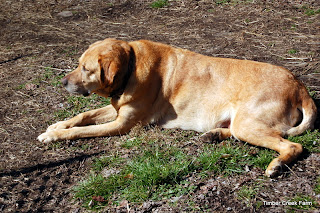 For his safety, we do not let him in the cow pastures or with the horses when we had them. He was kicked at a few times by the horses when younger but nothing serious. He can go near the pigs but the electric fence there, is low to the ground and he already shocked himself. Other than the fact that he does listen to my husband at the farm, I am not sure why he is so good with the animals. I was surprised. Maybe its just because we always have him with us when there with the animals. I can even let the goats out to graze around him and he doesn’t bother them at all.

A few disclaimers. Chief was a risky dog. I do not advocate keeping potentially dangerous dogs but somehow we both felt we could retrain him. And most importantly, we had no children. A few of our children still lived at home but they were adult sized people. I would never have attempted this with small children in the house. We all had to be on board with the program. It was a good outcome but it took a few years. We have lightened up on it now that he is an older dog. He loves us all and we can be more lenient at this stage. Chief is now 10. He is terrified of thunderstorms, gunfire, and fireworks. He tries to climb on my lap in those situations. He weighs 130 pounds. 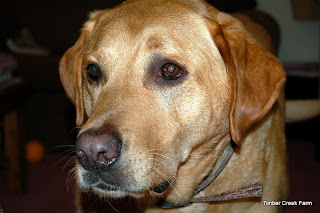 We do not allow him near children unless on a short leash because of his history. I am not endorsing our methods here, merely sharing our story. Each dog and family situation should be evaluated carefully. In this case we were successful. And I am happy that we went the extra mile for this dog. 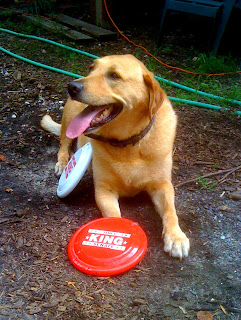 This post was featured on The Backyard Farming Connection Hop