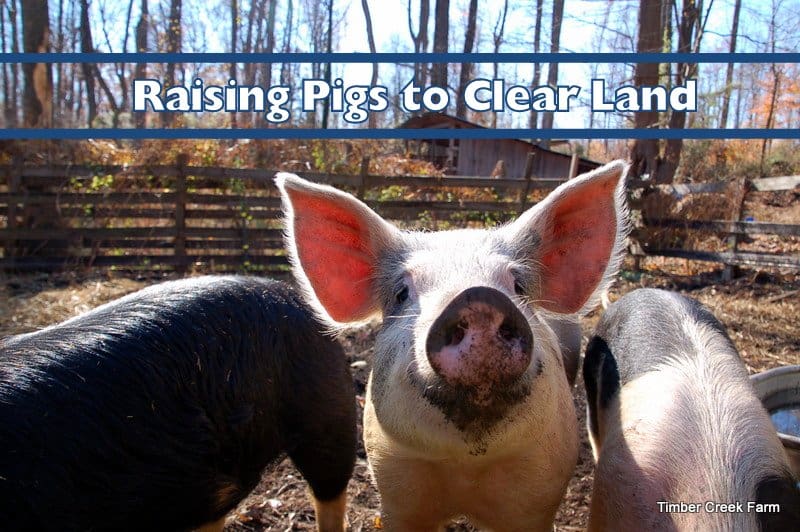 We didn’t start out raising pigs to clear land. The truth is we raise pigs and cows for meat. Some of our pigs are kept for the purpose of making more pigs. The correct farm term for this is breeding. The sows or breeders, (momma pigs) live with Charlie Pig right now and there is a new boar being raised to help Charlie with the job as he ages or as we need to vary the genetic pool.

Who is Using Pigs to Clear Land? 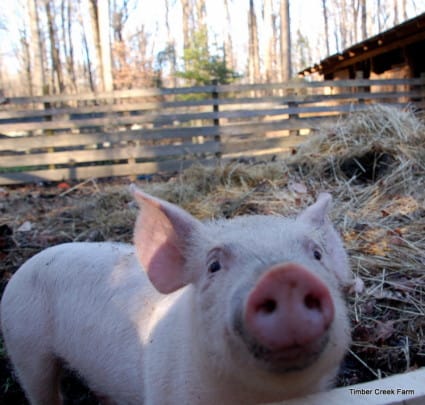 This was taken when the two pigs were small. As they grew the area became unfit and was a huge mud hole.

So how did we realize that pigs are amazing at the job of land clearing? We started researching the best way to raise pigs before they were brought here. We started with three pigs with the intent to breed them and have some to sell the following year. We read a lot about pastured pigs and also small pen raising. Of course, we came to the conclusion that raising them in a large field or pasture was the way we wanted to do this. One book we read that was very convincing is Gaining Ground by Forest Pritchard. Forest Pritchard writes a very convincing tale of how his family farm recovered from past abuses and turned to pasture, grass fed practices for raising livestock. Although the book is more of a memoir, it has lots of great information on natural farming practices while being an entertaining read.

We also had our own experimental areas on our farm. Some areas worked for pigs and some immediately became a huge mud hole. We had a large penned in area that used to be home to some goats. It had been empty for over a year and had grown up with weeds and small trees, along with old hay from the goats. It seemed like plenty of room but the drainage was really bad. After a short time, two feeder pigs made an extreme mud hole out of the area.

Our front pasture used to be home to the kids horses. It had been unused for a few years and was very overgrown. The run in sheds at each end were repurposed into farrowing stalls for the momma pigs. An important addition to the field was electric wiring to keep the pigs from straying out of the area we wanted them in. Pigs raised with electric wire boundaries are much more respectful of the jolt than those that were brought here as grow out pigs. 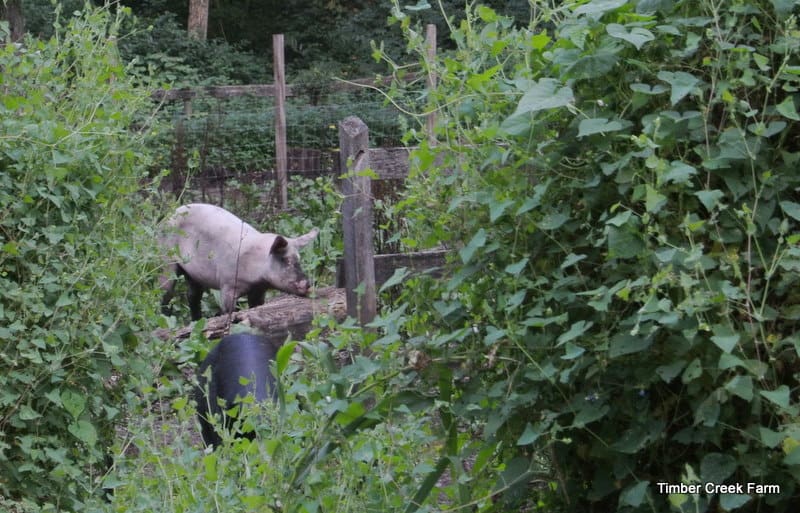 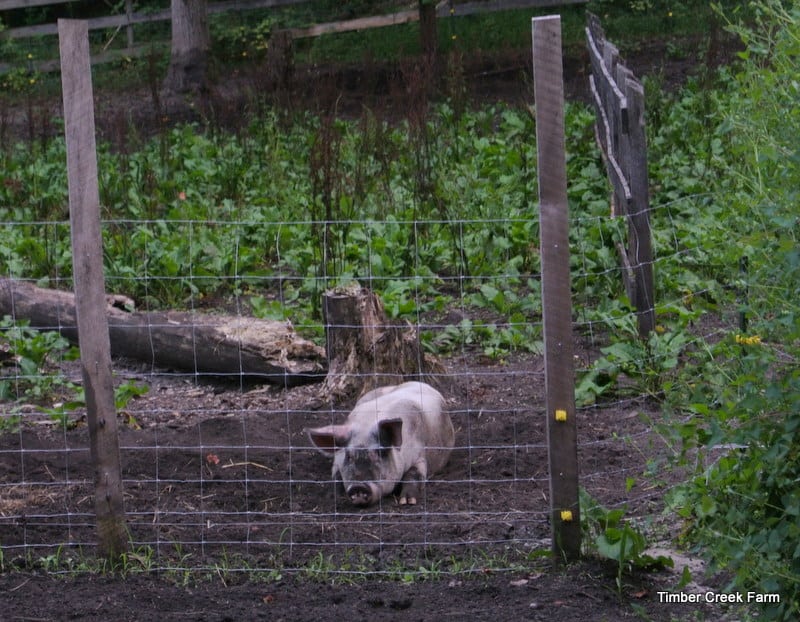 As the pigs begin to enjoy the garden areas, it gives their regular areas some relief to regrow some weeds and grass. This rotation has worked for us for over a year now. Fencing off different areas allows the ground to rest and parasites to die off. Letting the pigs clear the garden and root up all the remaining vegetation prepares the garden area for rest and winter. In the late winter, the garden is again fenced off, well before planting season begins. The field is then tilled well and allowed to rest before planting begins.

We are limited in how many pigs we can keep at this time, but piglets sell quickly. The  ability of pigs to clear ground though, makes it possible to clear more area and have more fenced off area in the future. Many people let pigs loose in wooded property and they do quite well. Our farm area is completely surrounded by more property that is hardwood forest. 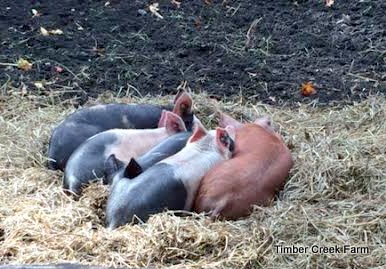 So while we may not have begun raising pigs for land clearing, it is clear that this could be a purpose in the pigs future. Letting them clear more land would enrich their diet, improve the taste of the meat, and allow more of the current fenced areas to rest for a longer time. 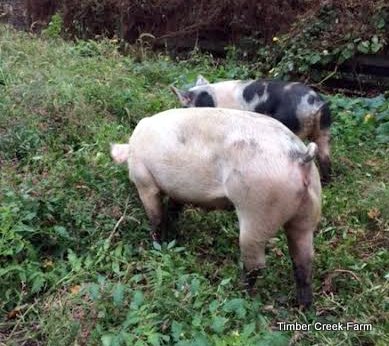 Day One Clearing the Garden 2014 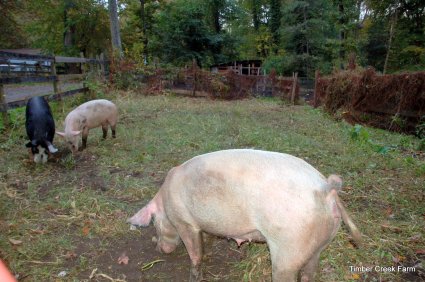 The Benefits of Pastured Pig Raising

Jack Kittredge from The Natural Farmer, writes more on the benefits of pasture and forest raised pigs. He writes that before World War 2, most pigs were raised in forest land particularly in the southern areas of the United States. For the modern day homesteader with a few acres, pasture raising and forest foraging makes sense when raising one or two hogs for the table. The free ranging hogs are happier, calmer and eat a more varied and natural diet than those fed commercial pig feeds based on corn and soy. We supplement our piglets diet with commercial feed but we are working towards a day when this will be unnecessary. Using the pigs to naturally clear more land on our property will give them a healthier diet and we will have more land to rotate them through. Currently, we have five piglets, some being raised for meat, and four adults in the breeding area. 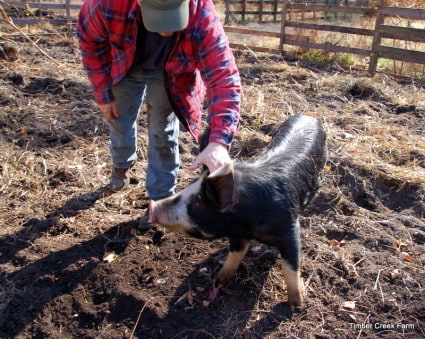 How are you raising your livestock animals. Do you do any free ranging, pasture raising, foraging with your farm animals?