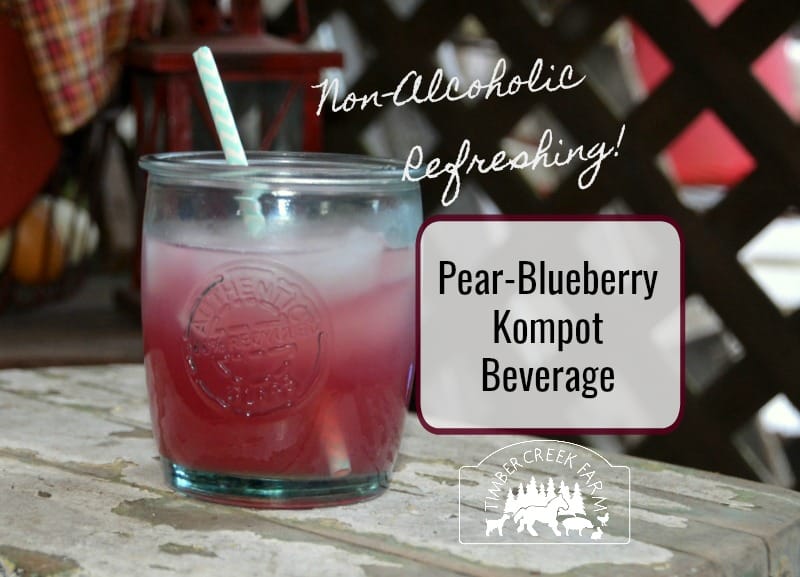 Other beverages will pale in comparison to a Pear Blueberry Kompot. Before the day began, I had no idea that I would be googling “What to do with pear peels” and going down a rabbit hole learning the history of kompots. The pears were getting past the point of no return. I planned to preserve them canned in water but ended up making a batch of pear butter and pear blueberry kompot.

That’s life when you don’t want to waste any of the harvest goodness. I have a hard time looking at the peels and cores from soft fruits and tossing it all to the compost bin. I am glad that I learned to make tomato sauce from the scrap pile. And so, as I started cooking the pear butter, I looked at the bowl of pear peels and decided their must be a way to turn those into attractive food.

The first hurdle to overcome was confusing the term kompot or compot with compote. A kompot is a European non-alcoholic beverage similar to a fruit juice. You can serve pear blueberry kompot both hot and cold. I found references and recipes for kompot on many Eastern European cooking blogs, Ukranian recipe blogs and Russian Websites. On the other hand, a compote is a dessert sauce prepared from fruit and drizzled over cake or other sweet food. 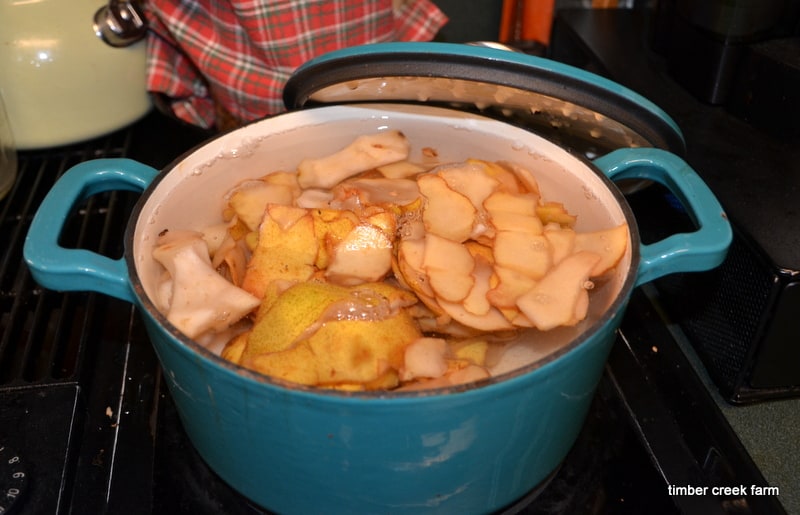 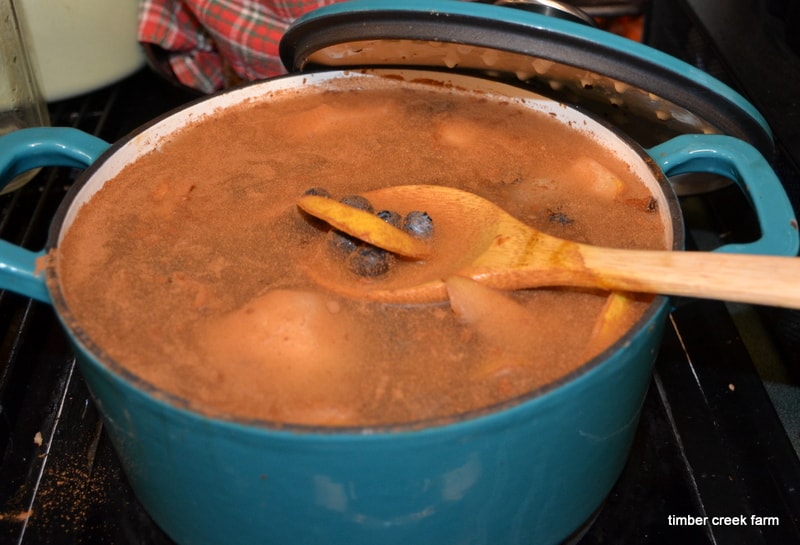 While the pear butter simmered, I had time to start the pear blueberry kompot. I tossed together 2 quarts of water and the pear peels from a dozen pears. I added a cup of blueberries, one cup of sugar, 2 tablespoons of lemon juice, and a half teaspoon of cinnamon.

Bring the mixture to a boil and continue  on a low boil for 15 minutes. Turn off the heat and let the mixture sit and cool.

When the liquid has cooled, strain out the solids. I used a strainer lined with cheese cloth to make sure my juice beverage was clear. You could also line a strainer with a basket style coffee filter. Of course I could not find these when I needed them.

Pour into quart canning jars, and store in the refrigerator. But first, I had to try a serving of this beautiful fruit juice drink. It was refreshing and delicious. I can also see that it would be amazing served warm on a chilly day, like hot cider.

Pear Blueberry Kompot and a Bonus from the Scraps

The pear butter was still bubbling and the kompot was complete, but there was still a problem. I still had a pile  of boiled fruit that was rather large and still looked wasteful to me. This reminded me of the tomato sauce I made from scraps. Why not do the same with the boiled fruit? I began pressing the boiled fruit from the pear blueberry kompot through the fine mesh strainer. You could also use a food mill for this. I press with the back of a large spoon, pushing and scraping the fruit. Occasionally, scrape the fruit puree from the bottom of the sieve. 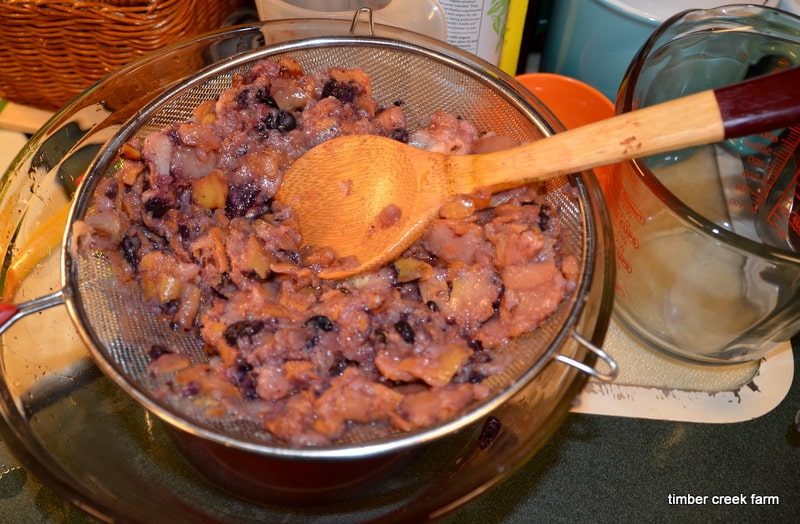 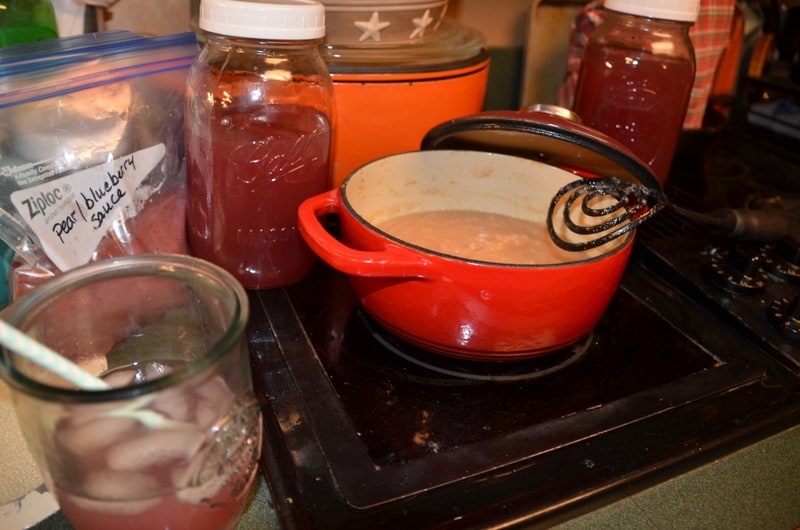 After I extracted all the puree from the boiled fruit, I gained two cups of fruit puree! This can  be used like applesauce in recipes or eaten as is. I plan to use it in baked goods, in place of some of the oil. You could also use the puree in this recipe for breakfast muffins in place of the fruit. Final production – one jar of pear butter, two quarts of pear blueberry kompot and two cups of pear blueberry puree. Oh and one totally messy kitchen!

Combine all the ingredients in a large pot. Bring the mixture to a boil. Boil for 15 minutes. Turn off the heat and let the mixture cool completely.

Strain out the solids using cheesecloth and a fine mesh strainer.

Store in glass jars in the refrigerator.

For other ideas on using fruit for beverages look into making a shrub! Or try this recipe for making mead. Looking for a more adult beverage? Check out this Shrub recipe from Lovely Greens. 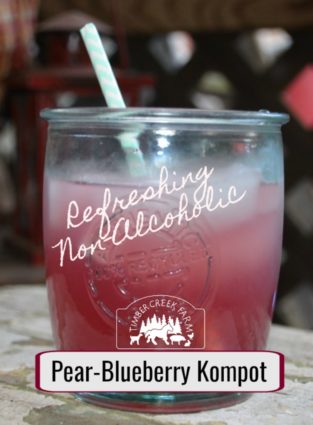