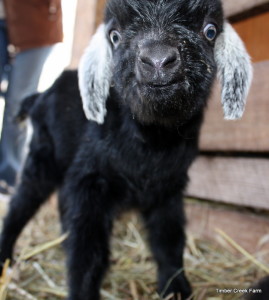 Micah is our four year old whether that we had the chance to bottle feed from birth. Micah was abandoned by his momma, Lilly. I guess she just didn’t have a maternal bone in her body. Lilly  had a great mom , but for some reason, when it was her turn to be a mom, she was not at all into it. She rejected Micah from the moment of birth. Walked away and would not look back. We tried all the tricks to change the scenario. But Lilly would not nurse her kid or even let him near her.

This is what a momma goat bonding with her babies should look like. Zoe was interested and attentive. Both Polly and Pongo were allowed to nurse immediately after she cleaned them up.

Lilly would hunch up to prevent Micah from nursing. If we held her still she would let him nurse for a few sucks until she could wiggle free from our hold.

Since three other momma goats gave birth the same day or so, we tried to have Micah adopted by one of them but they were happy with things the way they were. So Micah became a bottle baby. And lived at our house with the dogs. I still think he believes  he is a dog.

Micah hanging out with Mack. He fit right in.

We milked Lilly when we could, so he did get colostrum and some milk from her. But then we just fed him goat milk from the organic food store. It’s a good thing he was cute because that stuff was pricey! Micah thrived on his bottle feedings and after a couple of weeks he rejoined the herd and began making friends with the other kids.

Four years later, Micah is still our little sweet heart. He loves attention and is so gentle about taking food. 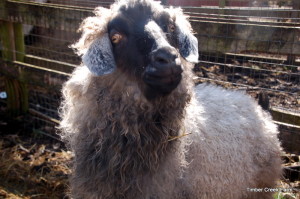 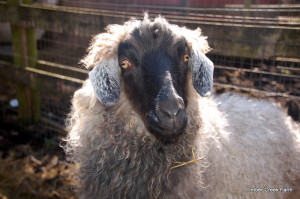 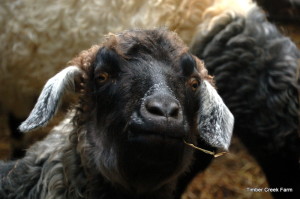 Since he is so tame, Micah also gets to go places like schools. He was invited to kiss a principal at an elementary school when the children met a reading goal. And he was a spokesman for a local farm animal  rescue that was invited to talk to the students about the rescue. Micah and some of his stall mates have also played the part of sheep in the nativity pageant. Pygora goats grow fleece much like sheep, making them look a lot like sheep in the middle of winter. 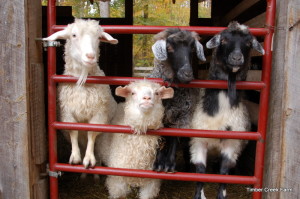