This year, it was time to beef up the egg production in our poultry area. Our hens are welcome to live out their days here with us even when they slow down on production but this can and will cause some issues down the road. As we wanted to add a dozen new hens to the chicken area, we still had 21 birds enjoying life in the palace. Having a recent loss of hens to a fox seriously cut into both our hearts and our fresh eggs, we needed more laying hens for the upcoming year. 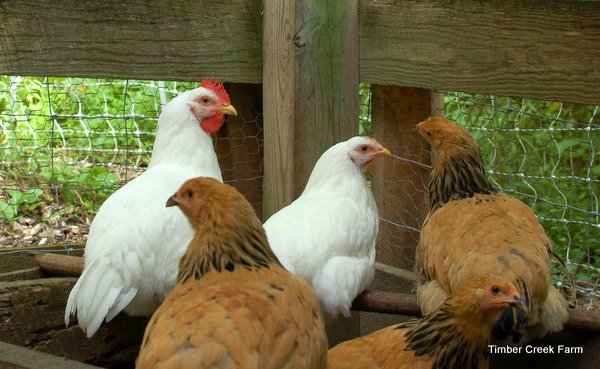 We do have the space for more, so the question wasn’t really if we could house them, it was more of a how could we house them, question. The existing chicken coop is a large converted garden shed. (more on that in this post). The back corner housed the two bantams, a roo and a hen. The new chickens were supposed to be all pullets but one White Rock Rooster slipped in the batch of chicks. This would make three roosters, but I wanted to keep him because I would be able to breed the white rocks at some point. I decided it was time to split the flocks into two batches. TJ Rooster would keep his current hens and the one side of the chicken coop. Little Roo and the new White Rock Roo, named King, would have the other half. I am hoping that since King grows up under Little Roo, they will get along. In addition they would have three bantam hens, the four red mystery hens, four Buff Brahmas, and three White Rock hens. Hens will be rearranged as they mature, if necessary.

The first step was to completely empty the chicken coop and start fresh. The existing bantam pen was disassembled and the small isolation coop was removed. I left the small coop outside in the run for the chickens to play in. The coop was swept clean. 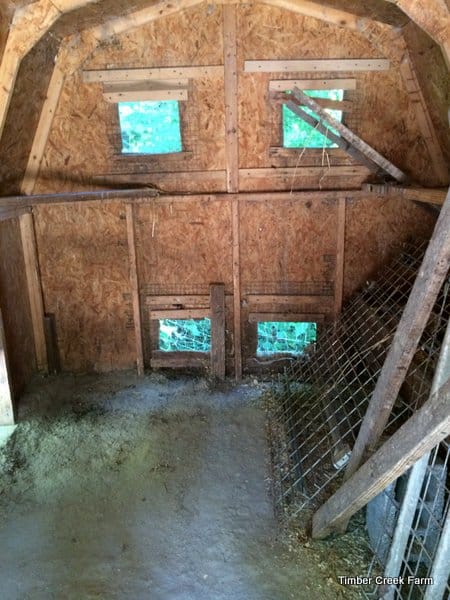 Now to rebuild the interior. The panels were installed to separate the interior into two separate areas. The height of the area on the left is just under 5 foot tall. This allows me to get into it for cleaning with out having to crawl. The end panel near the large doors opens for ease of cleaning and feeding. 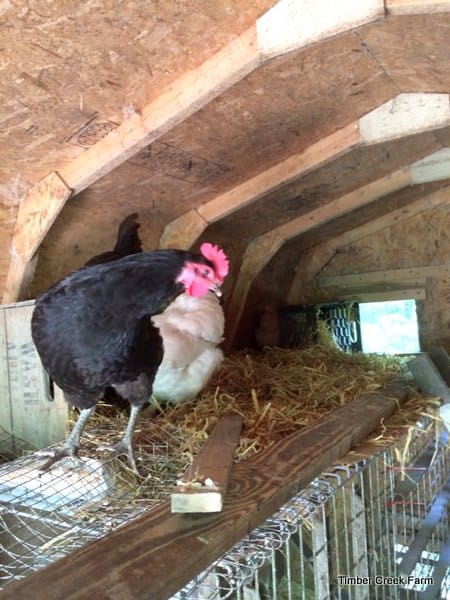 The top was put on the interior pen, creating the loft. On top of the pen, empty feed sacks and lots of straw were added to make it soft and cozy for egg laying. Two boxes were added for egg laying, but of course the chickens prefer to lie in between the boxes. 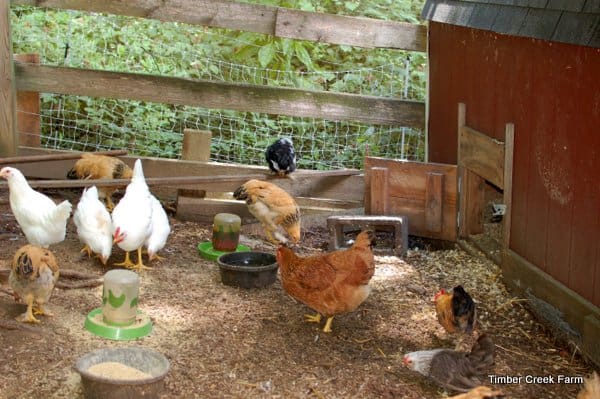 Outside, the pen to the left of  the big doors was enlarged to give this flock more outside space in a separate run. Partially covered to keep it cooler and shadier, this run is plenty large enough for this flock. 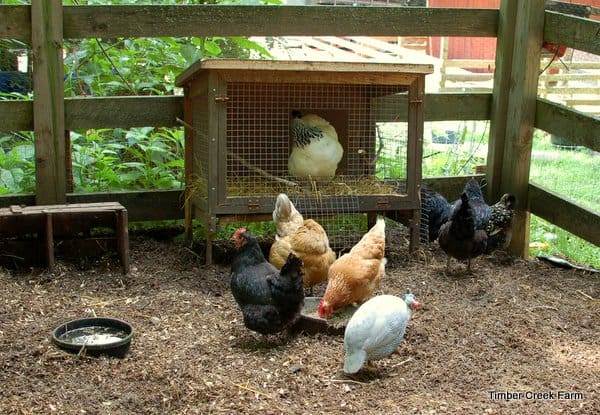 The rest of the outside run is still for TJ Roosters flock. They have plenty of space and if necessary, I can separate off a special area for the bantams if Little Roo and King don’t get along in the future This is life in our coop with 32 birds! 28 hens, three roosters and one guinea. I like the fact that all of the animal buildings on Timber Creek Farm allow options for expansion or rearrangement when necessary. Its important to always keep your options open!

If you are new to chicken keeping you will love my new book, Chickens From Scratch. Its available here in my Timber Creek Farm Shop and on Amazon.