Turkeys and Ducks, living together, happily ever after 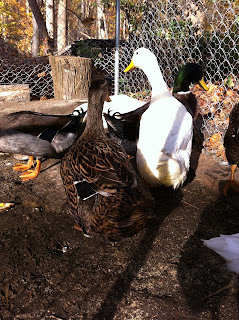 Last weekend we decided to move the Turkeys to a new address on the farm,  The backstory leading up to this decision to move them, starts with a decision to raise a few turkeys for our family freezer or table. We ended up with only two, who then developed into a beautiful Hen and Tom. We didn’t intend to get attached. They were kept in a different pen than the ducks and chickens who are kept for eggs. We tried not to notice how friendly and calm they were. We really tried to think of how delicious they would be on our table. We even told our family that this would lead to our Thanksgiving dinner centerpiece.

But, as time drew close and decision time drew near, we couldn’t do it. Gus and Greta Turkey had crossed that line and become part of the family. I placed my order for a free range turkey for Thanksgiving.

So, now the dilemma was what to do with Gus and Greta. You see, they had outgrown their pen which would have been the perfect size had they lived our their initial life expectancy and become dinner. A lot of options were discussed. Fortunately we have plenty of space. Unfortunately we do not have a lot of time. Building a new building at this time was not going to happen. But, the Ducks had recently taken up residence in the new Duck Home. It is spacious,  low to the ground, and includes a covered pen. Plenty of room for two gentle turkeys to join the Ducks. And the Turkeys packed up their feed bowl and water fount and moved across the street (ok not really a street, just a path between the coops) and moved in with the Ducks. The Turkeys moved in and the Ducks ran into the house and refused to come out. I guess we are thankful that there was no aggression. Although, I didn’t expect any. Both groups are extremely gentle. But now we had Ducks in the Duck house crowded into a corner and Turkeys standing in their new pen looking confused and lost. No Welcome Wagon, no here’s a cake we baked, welcome to the neighborhood. Nothing. 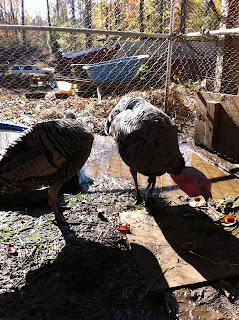 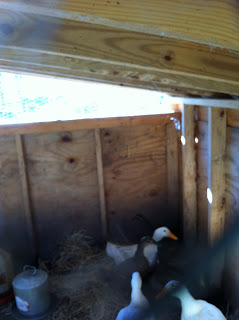 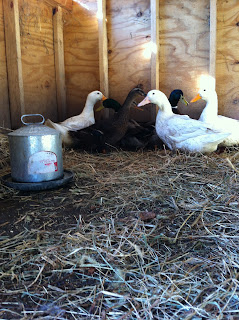 And to add to the drama, the Turkeys decided they like the end of the pen with the swimming pool. So the Ducks just stayed inside, occasionally looking out longingly at their pool. But not willing to get to know these large newcomers. 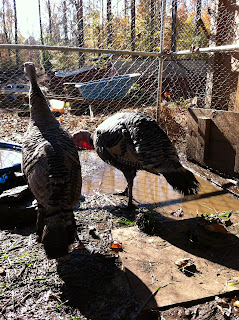 By day three, I tried to intervene. I could get the Ducks to leave the house with appropriate treats used as a bribe but as soon as either turkey would so much as look at them, the Ducks would run back inside. 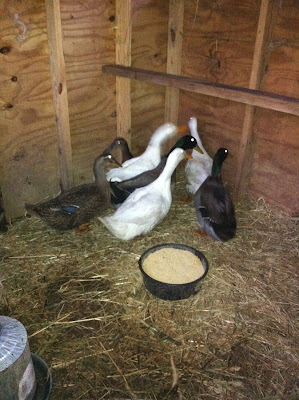 By day four, the Ducks were getting used to the Turkeys. I even saw them eating out of the same food bowl! For one split second anyway until the duck realized what was happening and ran back in the house.
Ducks and Turkeys settle down differently at night too. The Turkeys like to roost, but not until they have strutted around inside the house a while, inadvertently shepherding the ducks from one corner to the next. 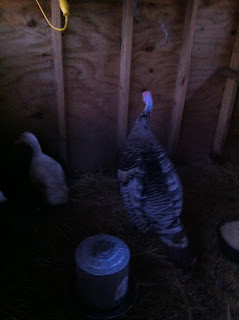 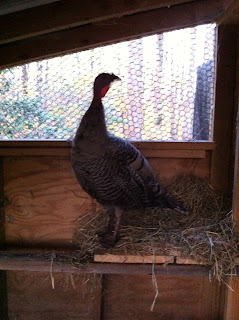 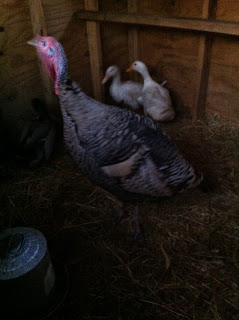 I know we are on the way to complete acceptance. And, at least there was no blood or aggression to deal with. The ducks have resumed laying eggs and peace is returning to their lives. This weekend we are adding another pen to the setup so they can go out either door into a run area. Maybe the Ducks will reclaim the pool and go for a swim!

Happy Thanksgiving to all of you and your families. Whatever ends up on your festive table, I hope the most important thing is the love shared and the blessing of being with those you love. If you have an extra chair, consider inviting in a  friend or neighbor who may be alone for the holiday. If your experience is anything like ours, you will be happy you did!

This post was shared on Farm Girl Friday Blogfest