Why Wyandotte Chickens are one of my top choices. 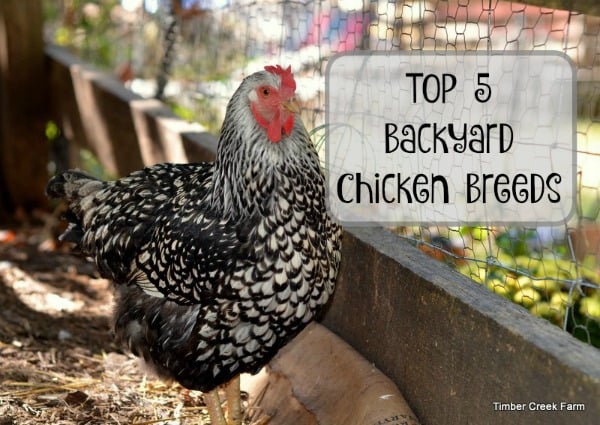 As chicken keepers, we always have a favorite breed or two that we recommend to others. When I am asked to tell my opinion of the best backyard chickens, there are a handful of choices that immediately come to mind. Wyandottes are definitely one breed of chicken on the list. What criteria is used to come up with a list of best backyard chickens? Some ideas I  had are feather coloring, mothering ability, egg laying rate, feed conversion, temperament, lack of broodiness, and hardiness. So as you can see, there are all types of factors that can land a chicken on the list of five best backyard chickens! Here are my top five. 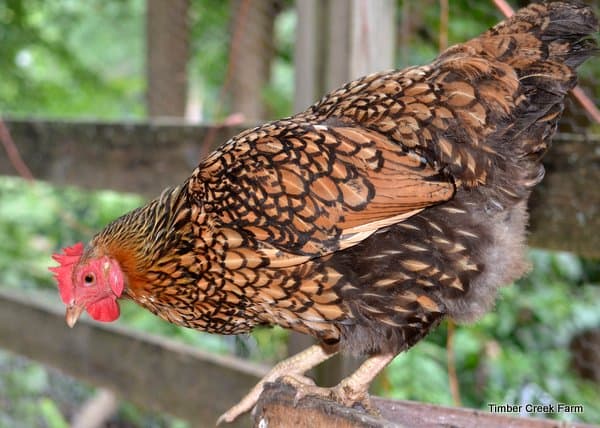 This popular breed was developed in the late 1800’s. The breed was named after the Wendat Tribe. Although no breeding records of their development have been found, the Dark Brahma is thought to be a part of the formula. With eighteen color patterns recognized, there is a pattern for everyone’s preference. I have both Silver Laced and Gold Laced Wyandottes in my flock. Some of the color patterns listed in the breed books are rather rare.

Dual purpose chicken– often considered a meat bird but I have found them to be a reliable laying hen.

Feather pattern– The pattern of the feathers tinged and outlined with black is stunning.

Hardiness– My Wyandottes have been incredibly healthy and hardy chickens. They rarely wander off during free ranging time, get along with the other hens, never seemed stressed. 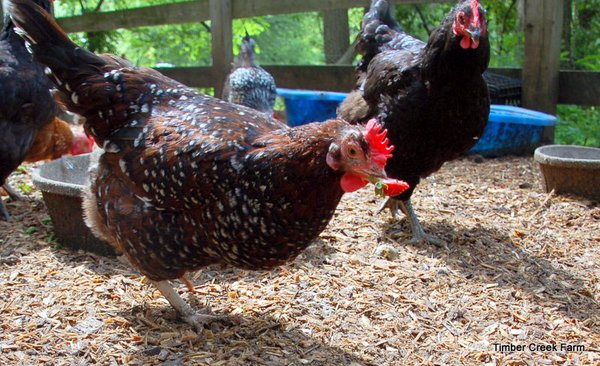 This is an English breed. The Sussex may have had Roman roots, but some people have suggested the Dorking as a possible ancestor. Also considered a meat breed, although I cannot figure out why. All of the Sussex breed chickens I have had were not very large or meaty birds. I have two Speckled Sussex in our chicken run now and they are a top favorite.

Temperament–  Above all chickens we have had, the Speckled Sussex are the sweetest birds. They stand at my feet until I pick them up. They follow me around clucking as if telling me stories from the coop. Gossip maybe? I like how inquisitive they seem, always off doing something, not really following the crowd.

Egg Laying–  Very dependable layers. I often find them in the nest box at the start of the day

Feather Pattern–  Long before I knew that there temperament was top notch, I was attracted to the confetti look on the feather pattern. Actually, the feathers have a band of white, a band of black and a band of dark brown. When the feathers are relaxed against the body, the white ends look like speckled dots against the black and brown. Sometimes there are even hints of blue in the black coloring. 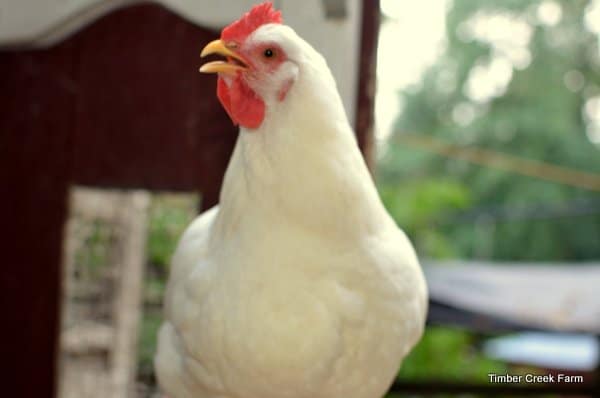 While we have raised white leghorns in the past, I was never a big fan of that breed except for the stunning all white feathers. Then I discovered the White Rock. Generally considered a meat bird, the White Rock is a much calmer bird than the leghorn breed. Large and fairly laid back, the White Rock is a great addition to any flock.

Temperament – White Rock chickens rival the Speckled Sussex  and Brahmas in my flock for sweet temperament. One of our pullets from this year was actually a rooster so we now can breed full White Rock chicks in the future.

So far, the White Rock Rooster is very calm, docile, and polite. I know that can change with age so I won’t let my guard down.

Dual Purpose breed – many chicken keepers will not agree with me on this point, but here goes. I think it makes more sense to raise a heavier bodied breed to add to our self reliant lifestyle. Now before everyone starts to ask how we could eat our chickens, let me admit, we have not ever eaten one of our laying hens. However, I like the idea that we could if we needed to. It’s part of my strategy for being self reliant. IF we needed to, we are raising dual purpose breeds to provide both eggs and meat. I recently wrote specifically about the Brahma breed. Striking in their size and the beautiful feather patterns, the Brahmas are one of the largest breeds of backyard chickens. With their large size and late maturity, I am sure the Brahma won’t win a lot of points with people for it’s egg laying capacity. Although I find them just as productive as most of my other  hens.

Hardiness – My oldest hen is a Brahma. She is over seven years old now. Large and full bodied, she is beautifully feathered  and able to withstand harsh weather conditions easily. Although my chickens do not have to withstand the cold wind or rain because they have a secure coop, it is nice to know that a lot of my chickens could survive in less than perfect conditions. Heat doesn’t bother them much which also surprised me because they are such a large breed of chicken.

Temperament–  Very sweet natured hens. My younger Buff Brahmas are now fully grown and laying regularly. They never fight over nesting space. Instead they will just go and find another less desirable space. 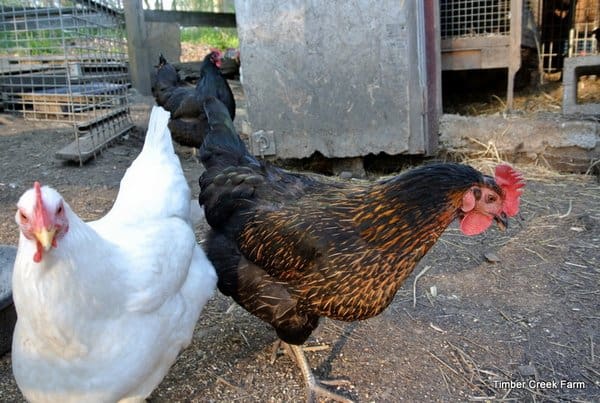 Last on my list of top five is the Black Star. Once, I brought home a mystery chick that had been mixed in with the wrong breed. It was missing a patch of downy feathers on it’s back and needed to be in isolation until we determined what was wrong. Feathers quickly grew back in and as the chick grew, it turned out to be a Black Star. Her name was Mystery and she ended up bonding with two bantams.

Sex Link chickens are a breed of chicken that can be sexed at hatch. The chicks are different colors or patterns at hatch. This sure takes away that surprise roosters factor. Since that first one that I brought home we have kept a Black Star in our coop.

The Black Star or Black Sex Link is the result of mating a Rhode Island Red  Rooster and a Barred Rock Hen. There are other sex link breeds, including a Red Star, and a Gold Star.

Egg Laying – even though most of my choices are dual purpose chickens, it is nice to have a few production hens. This breed is very reliable in the egg laying arena. Black stars lay large brown eggs.

Temperament– docile and sweet. Rarely a problem at all. Does not always return to the run after free range time, though.

Arguably, the list is very subjective and biased based on our needs and personalities. My flock is varied and has many different breeds. I know some poultry owners who prefer to raise only Rhode Island Reds. These Rhode Island Red owners had a primary goal of high egg laying capacity. Orpingtons are another favorite breed for many backyard chicken owners. Many people cite the calm temperament of the Orpingtons as the quality they were searching for. There are trends in popular chicken breeds, too. A few years ago, everyone I knew wanted to purchase Gold Stars for their egg laying capacity. White Leghorns are also good layers. Part of owning a backyard flock of egg layers is enjoying the different breeds available through hatcheries, or hatching out eggs under a broody hen or using an incubator. There is no one right choice for egg laying hens. Many breeds of chickens can become the best backyard chickens!

As you can see, choosing favorite breeds of chickens can be difficult! In reality, I could find good qualities in all of the chicken breeds that we have in our coop. 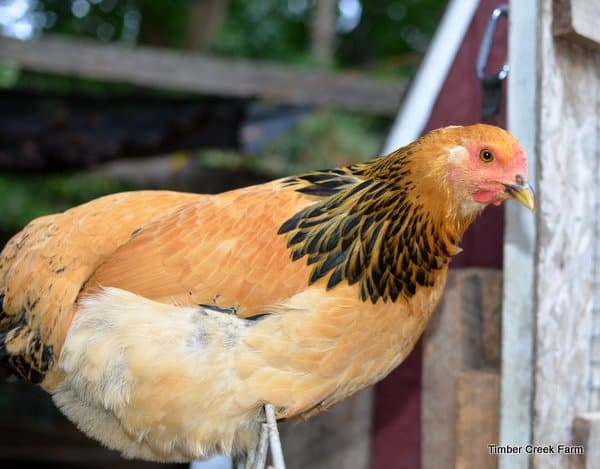 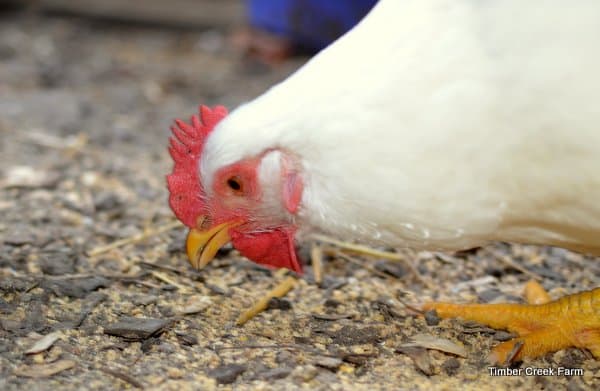