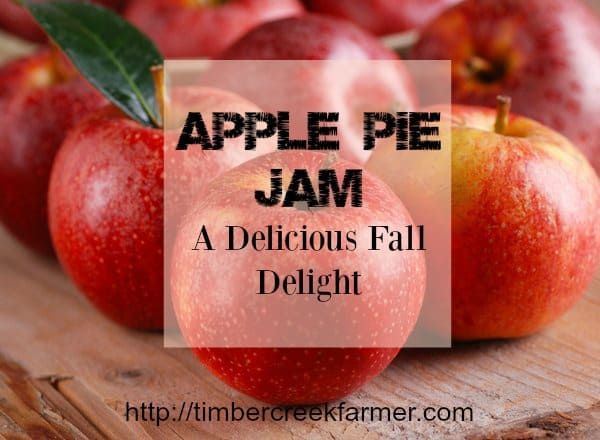 Apple Pie Jam is a favorite for fall and winter. The jam is not too sweet but has lots of great taste! One of the benefits of having an abundance of a particular veggie or fruit is that you feel a bit more comfortable experimenting with recipes. Not meaning to sound wasteful but if I am staring at two bushels of apples that have been gifted to me by my generous son, I feel a bit of freedom to express myself with the abundance. So after making gallons of applesauce, jars of pie filling, in addition to apple butter and spiced apples, I decided to try a recipe for Apple Pie Jam. One thing I am not too keen on though is the huge amount of sugar needed to make most jam recipes. For this recipe, I decided to make many variations on what I was finding in almost all Apple Pie Jam instructions. Pssst. If your looking for a great apple pie and pie crust recipe, try this one. 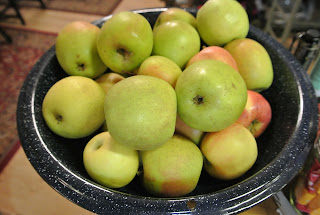 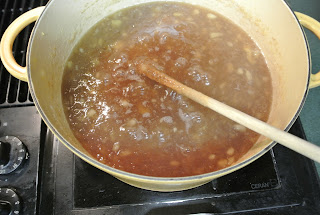 Pulling out the supplies and ingredients I grabbed my enamel cast iron pot. It’s large, holds 6 quarts easily, so I could make a big batch of experimental Apple Pie Jam. Clean and sterilize 10  half pint or 5 pint jars and lids. I always prepare one or two extra jars just in case the recipe makes more. 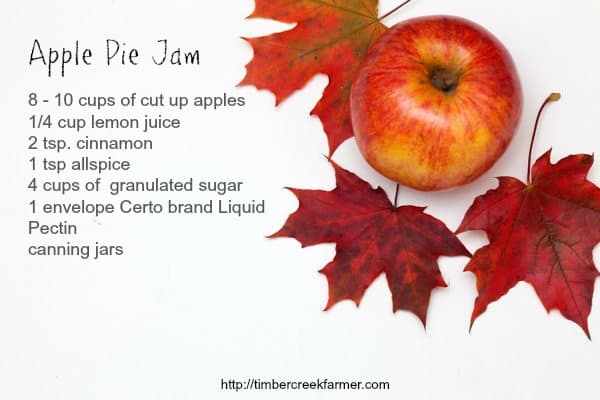 The first step is to wash  and peel the apples. I used about 25 apples but you need to just loosely fill the pan with cut up fruit. Add the lemon juice and bring the apples to a boil. Continue to simmer the fruit until it is soft and can be mashed. When the apples are soft enough to mash, remove the pan from the heat. I use a old fashioned potato masher to crush the fruit. You could lightly blend the fruit in a food processor or blender, but I don’t like to have another appliance to clean up later. I prefer the jam to be a little chunky but you can use your own preference on this.

Add the cinnamon, and allspice to the apples. Stir in about 4 cups of granulated sugar. This is where my recipe differs greatly from most recipes I looked up. Most called for 7 to 8 cups of sugar. Basically the thought of adding that much sugar to fresh fruit makes my teeth hurt. I wanted to see if this was really needed in order to make jam. In addition, I changed the spice quantities, and spice ingredients so I feel that I can really claim this recipe as my own! Keep it simple, I always say.

Return the mashed fruit to the heat and bring to a boil. Boil hard for four or five minutes and then add one envelope of Certo Liquid Pectin. Boil hard for one minute longer and the jam should be thick enough to stop the cooking. Be careful not to boil too long as the mixture can turn to hard candy! (Don’t ask me how I know this. It involved picking fresh raspberries and my first attempt at making jam)

Pour the hot jam mixture into the sterilized jars. Wipe the rims and cap with the two part lid. Process in the hot water canner for 10 minutes for half pints and 15 minutes for pints.

I think this recipe tastes very much like old fashioned apple butter. But it takes a lot less time to make! We have enjoyed it on toast, waffles and pancakes. I plan to make gifts this year including a jar of  Apple Pie Jam and a package of Pancake Mix. It’s a yummy change from maple syrup.

Still looking for ways to preserve apples? How about Apple Chips! Or Learn how to make Apple Cider Vinegar.

For a non-food alternative that makes a great fall hostess gift, make up a batch of Apple Cider Soap!