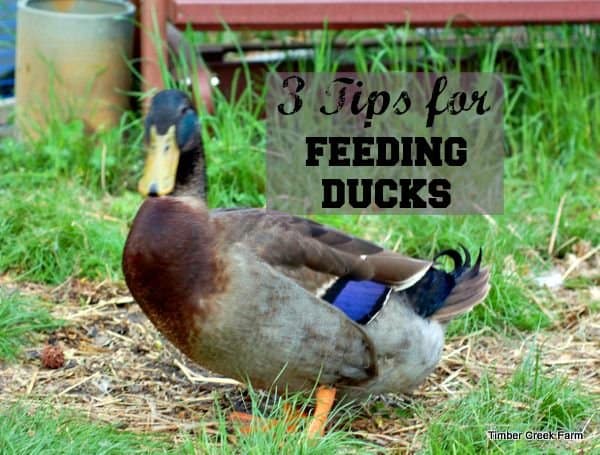 Did cute little ducklings follow you home from the feed store this year? Or did your computer secretly place an order with the hatchery? I know how these things happen. Believe me, a lot of chicks and ducks have found their way to our farm. And even though I have been raising poultry for a number of years, I recently realized that not everything I had learned about feeding ducklings was working. Here are some points on which I have changed my mind concerning feeding ducklings and ducks. 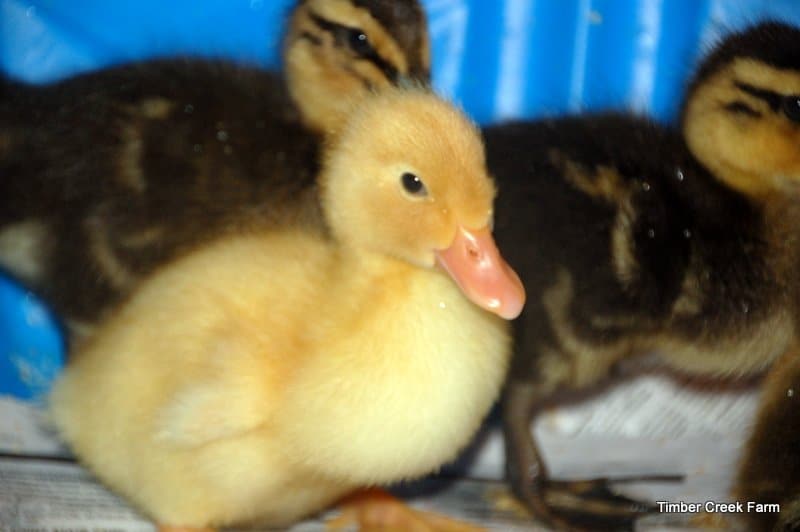 This was the way everyone I knew was feeding ducklings. However, feeding them a meat bird ration or a duck raiser ration can actually be too high of a protein content for the ducklings long term. I was told for many years to use this type of feed until the ducklings were nearly grown, but I have seen negative consequences from this practice. If you are raising ducks for meat, feeding a high protein ration may be the correct formula, since the sooner you reach market weight, the better. But with ducks kept as pets or as egg layers or breeders, the high protein during weeks 2 to 14 of growth can lead to conditions such as Angel Wing or Twisted Wing. This happened to one of the ducklings we raised from hatch here on the farm. As I had with the previous ducklings, I fed a commercial flock raising ration until the ducks reached 14 to 16 weeks of age.

However, one duckling did develop Angel Wing, so I looked into the causes and prevention. The extra protein during the development from 2 weeks to 10 weeks, can lead to very fast bone growth resulting in a twisting or bending of the bones in the wing. It usually only affects one of the wings. Pet ducks, kept in a fenced enclosure may not have any noticeable problems from the abnormal growth but ducks allowed to free range or ducks in the wild, will not move as quickly, will not be able to fly at all, and will be easier for predators to catch and kill. 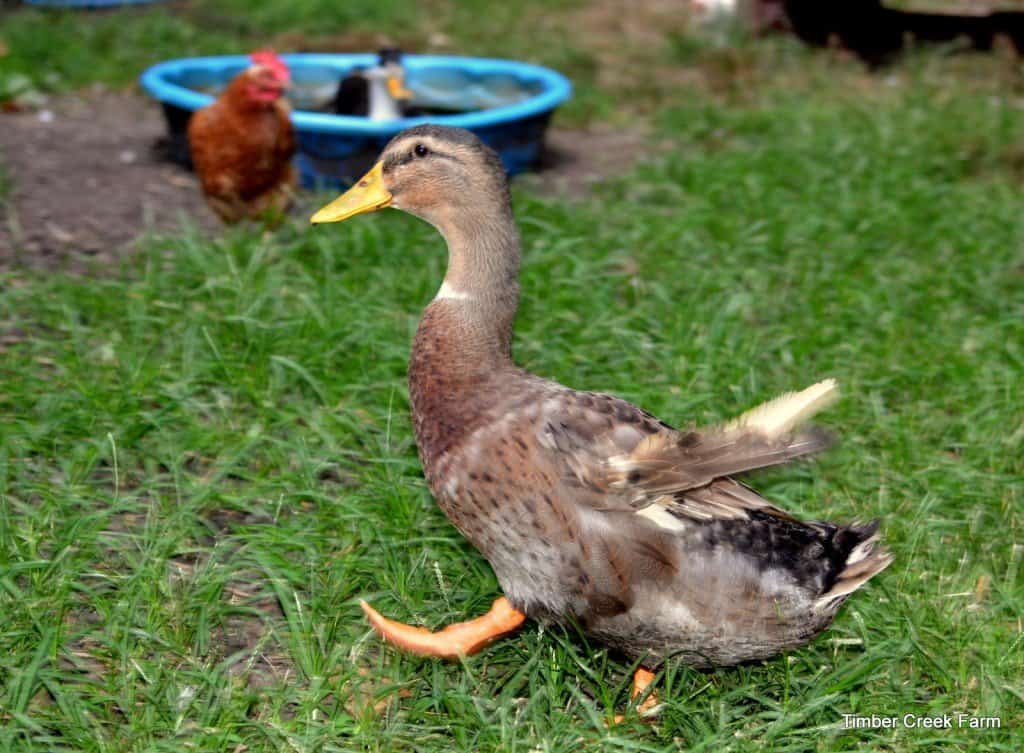 The recommendation according to experts like Dave Holderread, (Storey’s Guide to Raising Ducks) is to feed the 18 to 20% protein ration only for the first 2 weeks of a duckling’s life. Next switch to a 16% protein ration for the rest of the duck’s life. In addition, allowing the ducks some free ranging time, if it can be supervised to avoid predator attacks, will benefit the ducks diet greatly. Eating greens and bugs foraged in the wild keeps the diet balanced  with the commercial feed offered free choice. Alternatively, you can forage for them and take greens, weeds and cut up grasses into the pen. 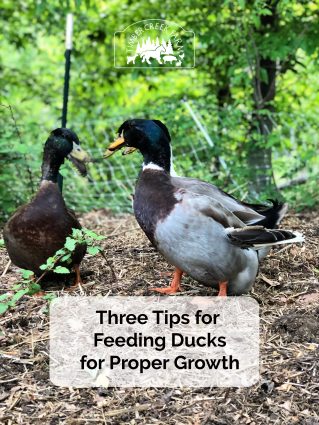 2. I no longer feed ducks bread products. And I don’t feed stale bread to wild ducks either.

Feeding high protein, high carbohydrate bread products to ducks can also lead to fast growth and twisted bones as the ducklings grow. Flocks of ducks that have no humans feeding them “treats” show no sign of Angel Wing or abnormally quick bone growth. If the duck cannot act and move quickly to try to escape a predator, it is in reality a sitting duck. 3. The treats I do bring my ducks consist of what they would be looking for in the wild.

Although I do allow my flock to free range when I can keep an eye on them, I still bring them some goodies. After all, it’s part of the fun of feeding ducklings and ducks. But instead of giving them any old foods we had at the house, I limit their treats to foods that are healthy for them. Here are some items that our ducks love and that are healthy for them: 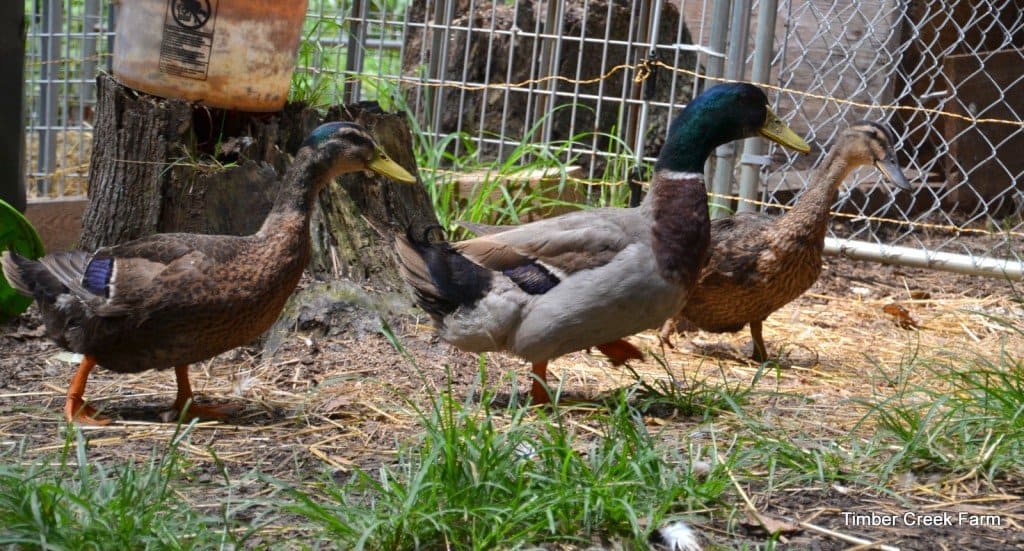 What do I recommend for feeding ducklings?

I have changed my program for feeding ducklings, to using a flock raiser or higher protein non-medicated chick starter ration for only the first two weeks of growth with ducklings. From weeks 3 to 14, I feed a 16% protein grain ration. After the duckling is fully grown, feed either the flock raiser ration if you are able to supplement enough with free ranging time or bringing in weeds, greens and grasses. Otherwise I use a 16% protein ration unless conditions call for a higher protein ration. These conditions might include absence of egg laying. It’s not at all a one size fits all feeding plan when caring for ducks in captivity. You must look at the total environmental picture and then feed accordingly for a healthy happy duck.

Let me also  state that I am not an expert at raising ducks and you should always do what you feel is right for your flock. Learn all you can about the nutritional needs of any animal and feed accordingly, using the best ingredients  you can source.